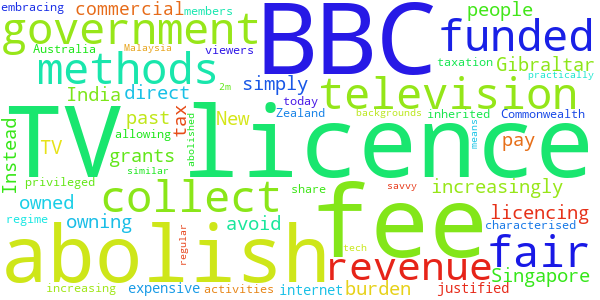 The government should abolish TV licence fees. Instead, the BBC should be funded through direct government grants, and allowing the BBC to collect more revenue through its commercial activities.

The TV licence fee was justified in the past when few people owned a television, and it was fair for those few to pay towards the BBC. However, today, with practically everyone owning a television, the TV licence fee becomes a tax which is expensive to collect (£126.2m in 2010/11), when it could simply be funded out of regular taxation methods. Moreover, viewers are increasingly embracing the internet as a means to avoid TV licencing, increasing the share of the burden on the less tech-savvy (whose backgrounds are already characterised as being less privileged) and the BBC themselves.

Many other members of the Commonwealth which inherited a similar TV licence regime have since abolished them - Australia, Gibraltar, India, Malaysia, New Zealand, and Singapore.