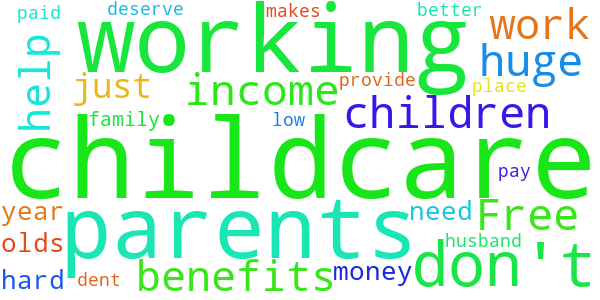 Free childcare when both parents are working. Not just those who are on benefits

Free childcare when both parents are working. Not just those who are on benefits

Free childcare is in place for 2 year olds where the parents have low income and mostly on benefits and don't work. If the parents are not working then their children don't need childcare. My husband and I work very hard to provide for our family but have to pay huge amount of money for childcare.

When childcare is paid for when both parents are working it makes a huge dent in income, we could do with the help. All children deserve this, It seems as though I would be better off not working.

The Government responded to this petition on Tuesday 1st November 2016

We give low-income 2-year-olds from working and nonworking households free early learning because they can arrive at school behind better-off children, and this helps to bridge that gap.

The first few years of a child’s life are fundamentally important. Evidence tells us that they shape children’s future development; influence how well children do at school; their on-going health and wellbeing; and their achievements later in life. It helps to promote a child’s physical, emotional, cognitive and social development.

This Government believes that no child should be held back in life because of their background. We want to support everybody to go as far as their talents will take them. Participation in early education at age two delivers greater benefits to disadvantaged children than early education at age three or four, but this group are less likely to access formal early education than their more affluent peers. The early learning for two-year-olds programme is therefore intended to help close this unfair gap. The two-year-old entitlement is in place to close the attainment gap between the most disadvantaged and their better off peers, rather than to act as a work incentive.

This petition was debated in Parliament on Monday 21st November 2016