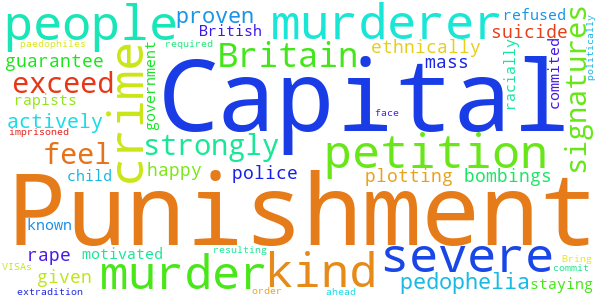 Bring Back Capital Punishment In Britain

Bring Back Capital Punishment In Britain

This petition is to show the government how strongly the people of Britain feel about Capital Punishment. Not only for child and police murderers, but for any kind of murderer. Also, paedophiles, rapists, and anyone proven to be actively plotting suicide bombings, or any kind of mass murder. Either, racially, politically, or ethnically motivated. It is well known that people who are refused British VISAs are more than happy to commit severe crimes in order to be imprisoned, thus resulting in them staying. If the crime commited is as severe as murder, rape or pedophelia, they too should face capital punishment over extradition. I guarantee, if this petition is given the go ahead, it will exceed the 100,000 signatures required.