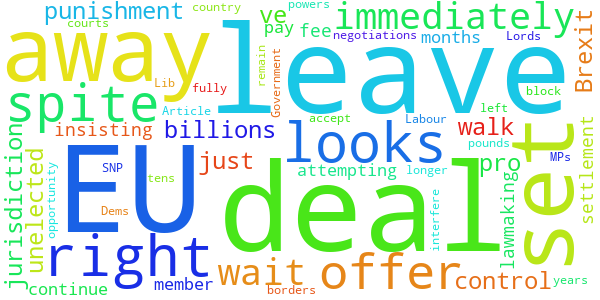 The Government should walk away from the Article 50 negotiations and leave the EU immediately with no deal. The EU looks set to offer us a punishment deal out of spite. Why wait another 18 months when we could leave right away and fully take back control of our country, lawmaking powers and borders?

The EU looks set to offer us a punishment deal out of spite, insisting we pay tens of billions of pounds as part of a ‘settlement fee’ and continue to accept the jurisdiction of EU courts even after we’ve left. Meanwhile pro-EU MPs in Labour, the Lib Dems and the SNP, along with unelected Lords, are attempting to block Brexit, the longer we remain a member the more opportunity they have to interfere. Why wait almost another 2 years when we could just leave right away?

The Government responded to this petition on Tuesday 17th October 2017

The country voted to leave the EU, and this Government respects that. A smooth and orderly exit is in the interest of both the UK and the EU.

In leaving the EU the Government will seek the best deal for the UK maximising the benefits from leaving the EU – control over our borders, laws and money – while maintaining the greatest possible access to EU markets and continuing to work with our European neighbours on common problems. After withdrawal, the UK will bring an end to the direct jurisdiction of the Court of Justice of the European Union (CJEU) in the United Kingdom.

The Prime Minister has been clear that the days of Britain making vast contributions to the European Union every year will end. The European Commission has set out the European Union’s position on the financial settlement, and the Government is undertaking a rigorous examination of the detail of this.

The Government has already introduced legislation to ensure the UK exits the EU with certainty, continuity and control. A smooth and orderly exit is in the national interest and further legislation will be introduced to deliver that.

This petition was debated in Parliament on Monday 22nd January 2018