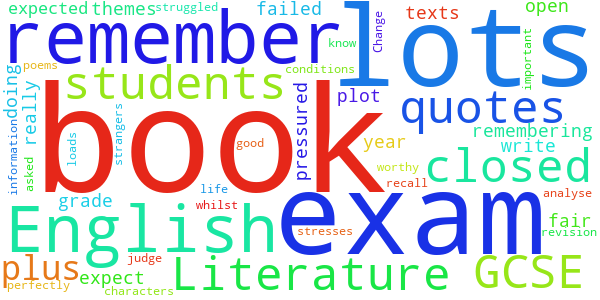 Last year, lots of students struggled with GCSE English Literature as it was a closed book exam. Because of this many failed. How can they expect us to remember quotes from 15 poems, plus how to analyse them, plus remembering the whole plot, themes, characters and quotes from another book.

Is it really fair that students have to remember so much, whilst also doing revision for other exams. It is important to know how to do all that is asked in the exams, but when in life will you ever have to remember lots of information about lots of texts, then be expected to recall it perfectly under pressured conditions, on top of loads of other stresses, then write about it for strangers to judge whether or not you are worthy of a good grade or not.

The Government responded to this petition on Tuesday 6th February 2018

Exam boards do not allow access to copies of whole texts in exams, but provide relevant extracts as exam materials. Pupils should be able to understand and analyse the texts, not memorise them.

We have reformed English GCSEs so that they are more rigorous. The new English literature GCSE encourages pupils to read a wide range of classic literature, including 19th century novels, Shakespeare and the Romantic poets. The poetry selection has to include no fewer than 15 poems by at least five different poets, including the Romantic poets, and a minimum of 300 lines of poetry.

We were pleased to see the rise in English literature GCSE entries in 2017. It is important that as many pupils as possible have the opportunity to study a range of high quality, intellectually challenging, and substantial texts from our literary heritage. When a wider range of pupils enters a subject this can change the nature of the cohort. Ofqual’s statistical approach to awarding means that, if the cohort’s ability remains broadly the same, the same proportion of pupils would get a grade 4 (standard pass) and above compared to the previous year. Ofqual, the independent qualifications regulator in England, found overall results for 16 year old students in English literature to have remained stable at grade 4/C. Therefore any change in the proportion of top grades (grade 7/A) was likely due to a change in the profile of the candidates rather than difficulty of the exam.

Ofqual’s regulatory requirements[1], which reflect DfE’s content requirements, are designed to reward students who have gained a deep understanding of literature and who have read widely throughout the course. Ofqual does not prohibit access to all textual material during an exam. Rather it requires that where an exam board provides students taking the exam with, for example, an extract from a novel, a scene from a play or a poem, this forms part of the exam materials. Ofqual therefore sets out an expectation that pupils will be given extracts of texts during their exams and are clear in their guidance that they do not expect students to be given a complete novel, play or anthology of poems.

Pupils are not required to memorise texts and will not be awarded good marks simply by memorising and writing out sections of the poems or texts they have studied. The mark schemes for the reformed qualification reflect the fact that students will not have access to all the texts, and do not expect extensive quotes from memory. Pupils may gain extra marks through the intelligent use of quotations, but the requirement is about pupils’ illustrating their interpretations of the text, and so demonstrating their understanding of the question, and quotations can be part of this.

The changes we have made are designed to reward pupils for reading and understanding important literature and appreciating it at a deeper level. For those engaging at this level, this will be a good preparation for A level for those choosing to study English post-16.

This petition was debated in Parliament on Monday 26th March 2018