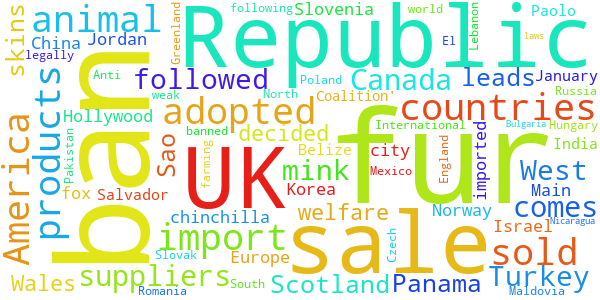 Ban the sale of animal fur in the UK.

Ban the sale of animal fur in the UK.

Fur farming was banned in England and Wales in 2000, followed by Scotland in 2002. However fur products can still be legally imported from other countries and sold here in the UK. Much of this fur comes from countries that have very weak or no animal welfare laws at all.

The Government responded to this petition on Tuesday 28th November 2017

While some fur products may never be legally imported into the UK the Government’s view is that national bans are less effective than working at an international level on animal welfare standards.

The UK Government is a world leader in animal welfare standards and takes animal cruelty very seriously. We are at the forefront of international efforts to protect the interests of animals, for example we recently announced proposals to ban UK sales of ivory to help bring an end to elephant poaching. We also work closely with and strongly support the efforts undertaken by several non-governmental organisations.

Regarding the fur industry specifically, we are working at an international level to agree global animal welfare standards and phase out cruel and inhumane farming and trapping practices. We believe this is the best way to prevent animal cruelty and that this approach will lead to a much higher level of animal welfare standards.

Our international efforts to bring about higher standards are supported by strict EU rules and regulations around fur imports, regulations that apply to both the UK and wider EU.

Firstly, these regulations include a blanket ban of the importing of furs from a number of animals, including cats and dogs as well as most seal skins and products. Secondly, there are regulations that ensure any fur that can be imported into the UK comes from animals that have kept been treated, trapped and killed humanely.

In addition to these EU regulations, the Convention on International Trade in Endangered Species (CITES) controls the fur from an endangered species. For example, there are export permits and commercial use certificates that strictly control the imports of furs from endangered species. These controls are implemented in the UK by the EU Wildlife Trade Regulations.

The Government will ensure that these controls are not removed once we leave the EU.

This petition was debated in Parliament on Monday 4th June 2018