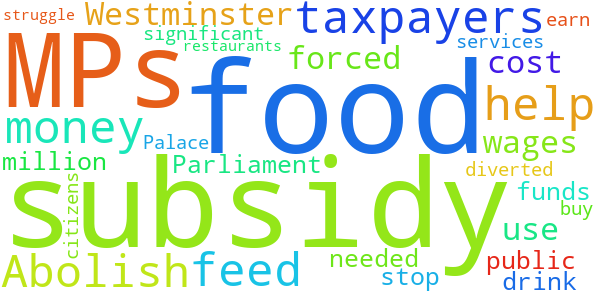 Abolish the subsidy on food and drink in the Palace of Westminster restaurants.

Abolish the subsidy on food and drink in the Palace of Westminster restaurants.

In 2016, the food subsidy in Parliament cost taxpayers around £3.7 million. This use of taxpayers’ money must stop and the funds diverted to public services where it is needed. MPs earn significant wages and citizens who themselves struggle to buy food should not be forced to help feed MPs as well.

The Government responded to this petition on Friday 6th April 2018

The House of Commons Authorities have outlined that catering services for the House of Commons are provided by an in-house team who do not provide a subsidised service, though the cost of running the service means that it runs at a loss. It is important to note that while in some venues the cost of providing the service exceeds the income received in sales, other venues in the Commons make a profit which contributes to reducing overall costs. As shown in their transparency publication
( https://www.parliament.uk/site-information/foi/transparency-publications/hoc-transparency-publications/catering-services/transparency-reporting-catering-services/) these costs have fallen considerably over the last two Parliaments and have halved since 2010.

Customers of the House of Commons Catering Services include some of the 650 MPs but also around 14,500 other pass-holders, many of whom are staff on lower wages that work irregular hours. In addition, members of the public and non pass
holding visitors to Parliament also have access to these services. The irregular hours and the unpredictability of Parliamentary business contribute to increasing the net
cost of providing a catering service. To offset this many of the restaurants, dining room facilities and their staff, are used to cater for private events at times when they are not required by the House. This is one of a number of measures used to reduce
costs.

Leader of the House

The Committee has made the following statement on its decision:

“The Petitions Committee has decided not to schedule a debate on this petition.

This is because the petition is based on a misunderstanding. It argues that the cost of food and drink in Parliament should be higher, because MPs are well paid.

You can find out more about the cost of catering in the House of Commons here: