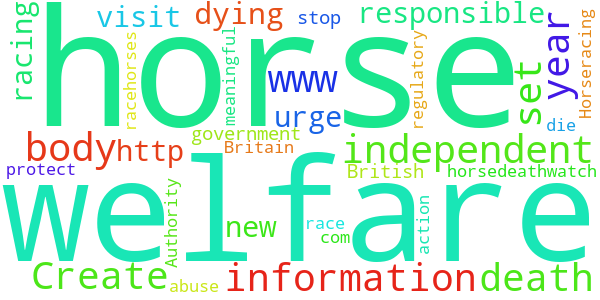 The British Horseracing Authority is responsible for race horse welfare. But around 200 horses die each year due to racing in Britain. We urge the government to set up an independent regulatory body, with horse welfare as its only interest, which will take meaningful action to stop horses dying.

The Government responded to this petition on Monday 19th March 2018

The Government does not consider that it is necessary to create a new body to protect racehorse welfare.

The British Horseracing Authority (BHA) is responsible for the safety of jockeys and horses at races in this country. The BHA works with animal welfare organisations like the RSPCA and World Horse Welfare to keep racecourses as safe as possible for horses.

According to the BHA the overall equine fatality rate in British racing has reduced by one-third in the last twenty years, from 0.3% to less than 0.2% of runners in 2017, the lowest figure on record.

Given that overall racehorse welfare is improving and fatalities at racecourses are falling, we do not see a need to set up another body responsible for racehorse welfare.
Racehorses, like all domestic and captive animals, are afforded protection under the Animal Welfare Act 2006. Under this legislation, it is an offence to cause any unnecessary suffering to an animal or for an owner, or keeper, to fail to provide for its welfare needs. Any person or organisation may initiate criminal proceedings where there is reason to believe that unnecessary suffering has been caused, or may report the matter to the police, local authority or RSPCA who will decide whether or not to institute a prosecution. The maximum penalty for an offence under the 2006 Act is a fine of £20,000 and/or six months' imprisonment.

If anyone has any concerns about the welfare of an animal or considers that its welfare has not been provided, then they should report the matter to the local authority who have powers under the 2006 Act to investigate such matters or to the RSPCA who can also investigate.

This petition was debated in Parliament on Monday 15th October 2018