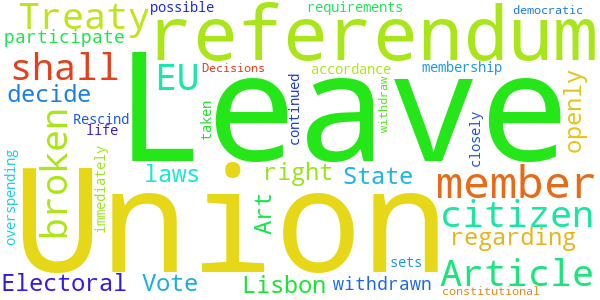 If Vote Leave has broken any laws regarding overspending in 2016 EU referendum then Art.50 should be immediately withdrawn and full EU membership continued.

Article 50.1 of the Lisbon Treaty sets out that a member can leave by " Any Member State may decide to withdraw from the Union in accordance with its own constitutional requirements."

Also, Article 10.3 of the Lisbon Treaty, "Every citizen shall have the right to participate in the democratic life of the Union. Decisions shall be taken as openly and as closely as possible to the citizen."

The Government responded to this petition on Wednesday 9th January 2019

It is regrettable that fines were levied on multiple groups, but it is firm policy the Article 50 notification will not be withdrawn. Britain voted to leave and Government respects that decision.

It is regrettable that fines have been levied on multiple groups involved in the referendum campaign. However, the Government is clear that there can be no attempt to rescind Article 50. The British people voted to leave the EU, and it is the duty of the Government to deliver on their instruction.

The result of the referendum held on 23 June 2016 saw a majority of people vote to leave the European Union. This was the biggest democratic mandate for a course of action ever directed at any UK Government. Following this, Parliament authorised the Prime Minister to trigger Article 50, passing the EU (Notification of Withdrawal) Act.

In last year’s General Election, over 80% of people then voted for parties committing to respecting the result of the referendum. It was the stated policy of both major parties that the decision of the people would be respected. The Government is clear that it is now its duty to implement the will of the electorate.

This was not a decision made after just a few weeks of campaigning, but one that came after a debate that had taken place both in Parliament and across the country for decades.

The Government is determined to make a success of the British people’s decision to leave the European Union. And that is how we have always approached the negotiations - anticipating success, not failure. It is vital that we try to reach an agreement that builds a strong relationship between Britain and the EU as neighbours, allies and partners. Not just for those who voted to leave, but for every citizen of the United Kingdom. We were given a national mandate and this Government is determined to deliver a deal in the national interest.

As the Prime Minister has said: “This is about more than the decision to leave the EU; it is about whether the public can trust their politicians to put in place the decision they took.” The British people can trust this Government to honour the referendum result and get the best deal possible. To do otherwise would be to undermine the decision of the British people. The premise that the people can trust their politicians to deliver on the promises they make and will deliver them in Parliament is fundamental to our democracy.

It is not acceptable for any organisation to breach electoral procedures and it is regrettable that fines have been levied on multiple groups involved in the referendum campaigns. The Electoral Commission is an independent regulator, accountable to Parliament, not the Government, and the use of its sanctioning powers show that it is doing its job.

However, almost three quarters of the electorate took part in the referendum, resulting in the highest ever number of votes cast for anything in UK electoral history, to leave the European Union. This instruction was then reinforced both in Parliament, and in the subsequent General Election. The British people therefore gave a clear directive to Government to leave the EU, and we are committed to respecting that directive. Our focus now is on making a success of Brexit, and delivering an outcome which will better the lives of British people, whether they voted to leave or to remain.


Department for Exiting the European Union

This petition was debated in Parliament on Monday 10th September 2018