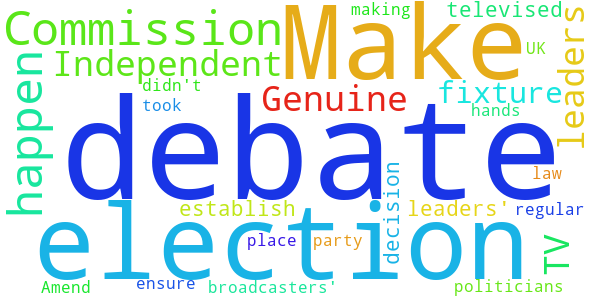 An Independent Debates Commission would take decision making out of the politicians and broadcasters' hands and ensure TV debates become a regular fixture of UK elections.

The Government responded to this petition on Tuesday 23rd October 2018

Televised election debates are a matter for political parties. The Government has no plans to change electoral law to make the debates mandatory.

The proposals for a Debates Commission are something to be considered in due course by political parties, closer to any general election in 2022.

Televised election debates took place in the 2010, 2015 and 2017 UK Parliamentary general elections. They form one of many mediums that enable political parties to convey their message to members of the public and address key challenges.

Any televised material, including televised election debates, is regulated by Ofcom, the independent media regulator, and is subject to the provisions in the Broadcasting Code. Ofcom does not obligate broadcasters to transmit election debates, nor does it have any decision-making role over the editorial format of any programme.

This petition was debated in Parliament on Monday 7th January 2019