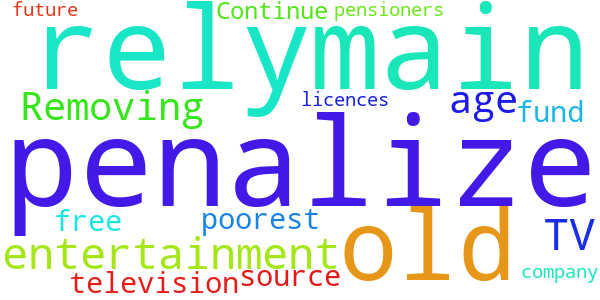 Continue to fund free TV licences for the over 75 in the future.

Continue to fund free TV licences for the over 75 in the future.

Removing them will only penalize the poorest old age pensioners, many who rely on their television for company and their main source of entertainment.

The Government responded to this petition on Monday 24th June 2019

The Government is clear that the future of the over 75 licence fee concession is the responsibility of the BBC from June 2020.

The Government recognises the importance of television to people of all ages, particularly for older people who value television as a way to stay connected with the world.

In the 2015 funding settlement, the Government agreed with the BBC that responsibility for the concession will transfer to the BBC in June 2020. In return the Government closed the iPlayer loophole and committed to increase the licence fee in line with inflation. The Government and the BBC agreed this was a fair deal. This reform was subject to public discussion and debated extensively during the passage of the Digital Economy Act 2017 through Parliament.

The future of the concession is the responsibility of the BBC. The BBC has announced that, from June 2020, only people who are aged 75 and above and in receipt of Pension Credit will continue to receive a free television licence. The BBC received views from over 190,000 people as part of their broader public consultation on the issue. It said the cost of the free TV licence concession for those over 75 would amount to £745m by 2021/22, which it said would threaten the future of services including BBC 2, BBC 4, BBC News Channel and Radio 5Live. It said restricting the concession to those on pension credit was ‘the fairest and best outcome’. The BBC estimates the costs of implementing the restricted concession at £250m in the first year.

Pension Credit is an income-related benefit which targets help at the poorest pensioners who have been unable to provide for their retirement. It provides a minimum income for people in retirement in addition to the State Pension. Approximately 900,000 people over 75 are currently in receipt of Pension Credit; this would rise to approx 1.5m people if all those entitled took it up.

The Government has expressed its disappointment with the BBC’s decision. It believes the BBC can, and should do more to support older people. It is the BBC’s responsibility to ensure its substantial licence fee income is used effectively to deliver fully for UK audiences. The Government has asked the BBC to look at further measures to support older people.