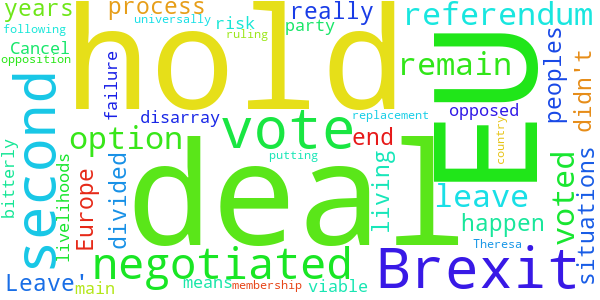 The Brexit process has been a failure. At the end of two years, our ruling party is bitterly divided, the main opposition not a viable replacement for it, and the deal we have negotiated is almost universally opposed.
No one voted for this to happen.

Whether you voted leave or remain, you didn't vote for us to leave the EU in disarray, with no deal, putting many peoples livelihoods and living situations at risk.

We must hold a second referendum, now we can all see what 'Leave' really means for this country and Europe. We must hold a vote between the following two options:

No deal is not an option.

The Government responded to this petition on Wednesday 30th January 2019

The Government remains clear that we will respect the result of the 2016 referendum, and we therefore will not hold a second referendum.

The Government is clear that we will not have a second referendum; it’s mandate is to implement the result of the previous referendum.

The 2016 referendum delivered a very clear instruction to Government - to withdraw from the European Union. Since then, this Government has remained committed to honouring that instruction, given to us through 17.4 million votes to leave the European Union - the highest number of votes cast for anything in UK electoral history.

That result was reinforced not only by Parliament’s passing of the European Union (Notification of Withdrawal) Bill with clear and convincing majorities; but also in the 2017 General Election, where over 80% of people also voted for parties committed to respecting the result of the referendum. In fact, both major parties stood for election on a stated policy to respect the decision of the people. The Government is clear that it is now its duty to implement the will expressed by voters in the referendum - respecting both the will of the British people, and the democratic process which delivered the referendum result.

The British people must be able to trust in its Government both to effect their will, and to deliver the best outcome for them. As the Prime Minister has said: “This is about more than the decision to leave the EU; it is about whether the public can trust their politicians to put in place the decision they took.”

The Government therefore remains committed to delivering on the instruction and the mandate given to us by the British people - to withdraw from the European Union. We continue to work to reach consensus on the deal we have negotiated, to enable a smooth and orderly exit, and deliver an outcome which betters the lives of British people - whether they voted to Leave or to Remain.