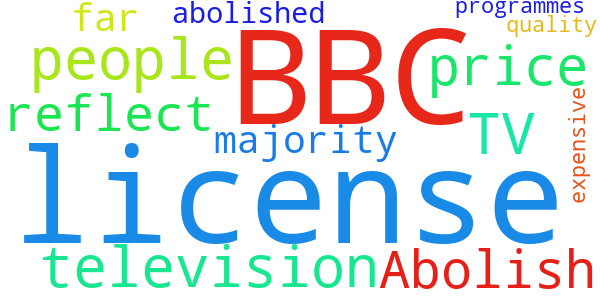 The quality of BBC programmes do not reflect the price of the TV license. It is far too expensive for the majority of people and should be abolished.

The Government responded to this petition on Wednesday 26th June 2019

A television licence is required to watch or receive television as it is broadcast live or on BBC iPlayer.

The licence fee is payment for a licence to watch or receive television programmes. It is not a fee or charge for BBC services and is payable regardless of whether the licence holder ever watches the BBC. Licence fee revenue is not just used to fund the BBC, it is also used for other strategic public service objectives including broadband, local television and S4C.

The licence fee funding model was considered as part of Charter Review 2015-16. The BBC Charter Review consultation received over 192,000 responses and found the majority of the public do not want to see a change in the way that the BBC is funded: 60% thought the current licence fee model did not need to be changed, while only 3% of respondents supported a subscription model and 1.5% advertising.

The current system commands wider public support than any alternative model provides the BBC with a sustainable core income paid by all households who watch or receive television. As a result, the government committed to maintain the current licence fee funding model for the duration of the current Charter period.

The Government is therefore committed to ensuring the BBC continues to deliver high quality, distinctive content for all audiences. That is why we have guaranteed the licence fee level will increase with inflation until 2022.

On editorial matters, the BBC is operationally and editorially independent from government and the government cannot intervene in the BBC’s day-to-day operations. As the BBC's independent regulator, Ofcom is responsible for ensuring the BBC delivers for audiences - including how the BBC meets its mission and public purposes.