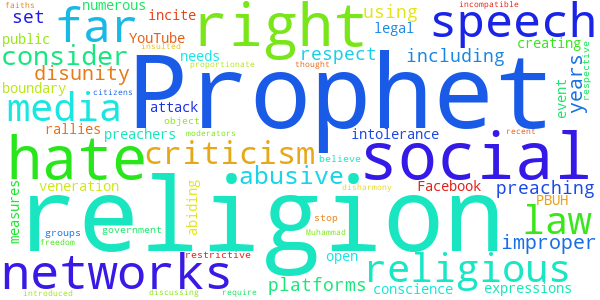 In the recent years numerous far right groups have insulted prophets of faiths including Prophet Muhammad PBUH, using public YouTube, Facebook and other social media platforms. I believe there needs to be a legal boundary set when discussing criticism against religions and their respective Prophets.

The open rallies and social media networks require moderators to stop hate speech. We have far-right preachers who are creating disunity, disharmony against law abiding citizens. Where such speech/expressions incite religious intolerance e.g. in the event of an improper or even abusive attack on an object of religious veneration, the government should consider them to be incompatible with respect for the freedom of thought, conscience and religion and take proportionate restrictive measures.

The Government responded to this petition on Monday 15th July 2019

The Government is committed to the principle of freedom of religion and belief. But this needs to be balanced against other rights and freedoms, as set out in the Online Harms White Paper.

Freedom of religion or belief is a fundamental human right and one which must be upheld and defended. Equally, freedom of speech is the foundation of a healthy society, allowing for debate and disagreement, underpinned by those values that bind people together - tolerance, equality and fairness. It is important that all have the right to speak freely, and that a strong legal framework provides the appropriate space to do so. The Government will continue to protect people’s legitimate rights and freedoms whilst also remaining committed to tackling hate crime, both online and offline.

The Online Harms White Paper, published in April sets out the Government’s plans for world-leading legislation to make the UK the safest place in the world to be online. The internet and other new technologies have driven dramatic improvements to the economy and society. The benefits of technological innovation should rightly extend to all citizens, and harmful behaviours and content cannot be allowed to undermine these. People have strong and legitimate concerns about their safety and security online – the Government is clear that what is unacceptable offline should be unacceptable online. The challenge as a society is to help shape an internet that is open and vibrant but protects users and communities from harm.

As outlined in the Online Harms White Paper, the Government intend to establish in law a new duty of care on companies towards their users, overseen by an independent regulator. This regulator will set clear safety standards, backed up by mandatory reporting requirements and effective enforcement powers. Companies will be held to account for tackling a comprehensive set of online harms; these range from illegal activity and content to behaviours that may not be illegal but are nonetheless highly damaging to individuals and society.

In February 2018 the Prime Minister announced a review by the Law Commission of the law in relation to abusive and offensive online communications, to highlight any gaps in the criminal law which cause problems in tackling this abuse. In its scoping report published last year, the Law Commission concluded that behaviour is broadly criminalised to the same extent online as offline and recommended a clarification of existing communication offences.

The Government has now engaged the Law Commission in a Phase 2 of their Review of Abusive and Offensive Online Communications. The Law Commission will review the current communications offences to establish whether the law is fit for purpose, and whether co-ordinated harassment by groups of people online could be more effectively dealt with by the criminal law. A final report, setting out specific recommendations for legal reform, is due to be published in early 2021.

Finally, the Hate Crime Action Plan refresh has improved the response to all forms of hate crime and ensures a renewed commitment that victims remain at the heart of the work. In this refresh the Government recognises the need to focus on high risk environments, such as online. That is why, the Government committed additional funding to continue to protect places of worship alongside just over £1.5 million for projects to tackle racially and religiously motivated hatred. This includes support for support for Working Groups to Tackle Antisemitism and Anti-Muslim Hatred, among other important initiatives. The Government also launched a wide-ranging national hate crime public awareness campaign to publicly address hate crime in 2018, including online hate, which was re-run in 2019. Police also now record the faith when a religious-based hate crime has taken place to increase understanding and help target police resources.

The Committee decided not to schedule a debate on this petition at this stage as it will be considering the issues it raises as part of ongoing work into tackling online abuse.