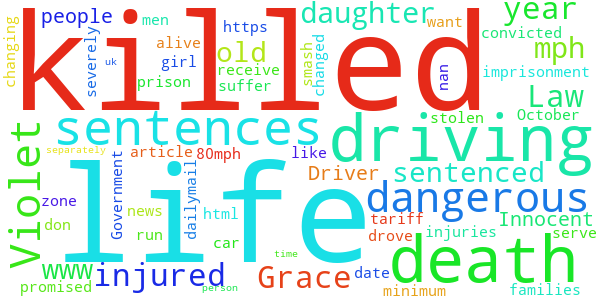 The men who killed our daughter drove a stolen a car at 83 mph in a 30 mph zone. They killed our 4-year-old daughter Violet-Grace and severely injured her nan, who has life-changing injuries. They will serve less time in prison than Violet was alive. I don’t want other families to suffer like this.

In October 2017, the Government promised life sentences for death by dangerous driving. It’s now 2019. Innocent people have been killed, but nothing has changed. The law is out of date.

Anyone convicted of death by dangerous driving should receive life imprisonment with a minimum tariff of 15 years. If more than one person is killed or injured, the sentences must run separately.

The Government responded to this petition on Monday 25th February 2019

Driving offences can have devastating consequences for victims and their loved ones. Sentencing in individual cases is always a matter for the courts, which are independent.

This was a deeply tragic case and our sympathies remain with Violet-Grace’s family. No sentence can make up for the loss of a loved one but we are focused on getting the law right, to ensure the changes we make are comprehensive, proportionate and, we hope, might help avoid some further unnecessary deaths on our roads.

Minimum sentences are rarely used in criminal law in England and Wales. To allow judges to take into account all circumstances of the case, the normal practice is for Parliament to set maximum penalties and for the courts to determine the appropriate sentence, having regard to the facts of an individual case. This is why our sentencing framework generally sets maximum penalties but not minimum penalties, and even where a minimum sentence is introduced the court retains a discretion not to impose the sentence where it would be unjust to do so in a particular case.

While we recognise the very great harm caused by dangerous drivers who are responsible for multiple deaths or injury, it is a general principle of law that sentences are imposed to be served concurrently when they relate to the same course of events and consecutively when they relate to separate incidents. However, the death of more than one victim as a result of the offence is an aggravating factor the courts take into account in determining the length of sentence to impose.

We will bring forward proposals for reform of the law as soon as parliamentary time allows.

This petition was debated in Parliament on Monday 8th July 2019