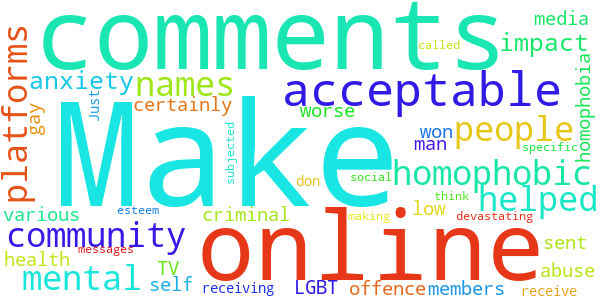 As a gay man I find it devastating how members of the LGBT community are still subjected to homophobic abuse online.

Just because I am on TV I don’t think that makes it acceptable to be sent homophobic messages/ comments on social media platforms.

Nobody should have to receive these comments.

I won’t go into detail as to the various names I have been called, but this should not be acceptable and can have an impact on people’s mental health and has certainly helped in making my anxiety and low self esteem worse by receiving them.

The Government responded to this petition on Thursday 28th March 2019

The Government recognises the harm that homophobic online messages can cause. We are working cross-Government to challenge inequality and make the UK’s online environment a safer place for everyone.

The Government has asked the independent Law Commission to review current hate crime legislation to ensure it is effective and consistent. This would include within its scope the issue of protections offered against hostility towards someone’s sexual orientation whether that hostility manifests online or offline. We look forward to seeing the results of the review.

The internet provides a wealth of opportunities for people globally. It is a platform for everyone to share experiences and creativity, and it encourages rich discussion. It has allowed people to create communities and interact in ways that were not previously possible. The Government recognises, however, that some people exploit these opportunities to spread harmful messages which would not be tolerated offline. Protecting people online is a top priority for Government.

As part of our efforts to make the UK the safest place online in the world, the Prime Minister announced in February 2018 that the Law Commission was to review the current law around abusive and offensive online communications and highlight any gaps in the criminal law which cause problems in tackling this abuse. The Commission was asked specifically to consider the applicable criminal law, identifying any deficiencies, focusing on whether the criminal law provides equivalent protection both online and offline. The Law Commission produced a scoping report in November 2018, Chapter 9 of which is devoted to hate crime online. You may wish to read the report at https://s3-eu-west-2.amazonaws.com/lawcom-prod-storage-11jsxou24uy7q/uploads/2018/10/6_5039_LC_Online_Comms_Report_FINAL_291018_WEB.pdf.

The Law Commission recommended reform and consolidation of existing criminal laws dealing with offensive and abusive communications online; a specific review considering how the law can more effectively protect victims who are subject to a campaign of online harassment; and a review of how effectively the criminal law protects personal privacy online.

The Government has asked the Law Commission for a specific review looking at hate crime legislation and whether it is working effectively and consistently. It will include whether the hate crime occurs online or offline. We look forward to seeing the results of the review.

In addition, the Government is taking significant steps to tackle hateful activity online:
• We are funding a National Online Hate Crime Hub which uses specially trained police officers and staff to investigate reports.
• We supported the European Commission Code of Conduct for Countering Illegal Hate Speech which has been signed by key companies including Facebook, YouTube, Microsoft, Twitter and Instagram. A key aim is to ensure that requests to remove content are reviewed in less than 24 hours, and content is removed if necessary.
• More widely, a joint Department for Digital, Culture, Media & Sport (DCMS)-Home Office White Paper will be published this year, setting out a range of legislative and non-legislative measures detailing how we will tackle online harms and set clear responsibilities for tech companies to keep UK citizens safe.

Homophobic abuse can have potentially devastating impacts on victims and we are working to challenge inequality beyond a law enforcement approach alone. In July 2018, the Government Equalities Office (GEO) launched the National LGBT Survey to understand LGBT people’s experiences of accessing services. Over 108,000 people completed the survey. In response to the findings, GEO launched an LGBT Action Plan setting out 75 commitments to improve outcomes for LGBT people. The Action Plan includes a £4.5 million fund to address inequality and support the delivery of commitments cross-sector.

• The Home Office is supporting the police to improve how they respond to hate crime and raise awareness of local support agencies for LGBT victims. The 2018 refresh of the Hate Crime Action Plan is supporting police training that is tailored to the needs of victims, such as those of homophobic, biphobic and transphobic hate crimes.
• The National Crime Agency (NCA) will ensure LGBT people can access educational online safety interventions that are informed by their experiences. The NCA will develop effective and appropriate education interventions to ensure LGBT people can be full, equal and safe participants in online activity.

This is a revised response. The Petitions Committee requested a response which more directly addressed the request of the petition. You can find the original response towards the bottom of the petition page (https://petition.parliament.uk/petitions/239444)

This petition was debated in Parliament on Monday 1st July 2019