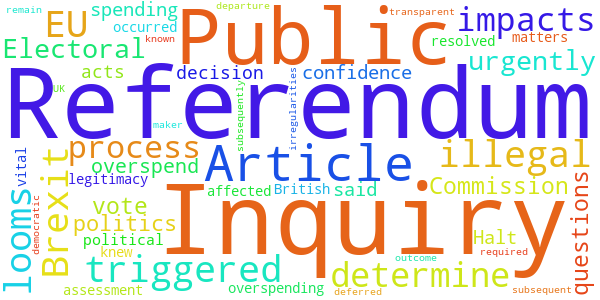 Halt Brexit For A Public Inquiry

Halt Brexit For A Public Inquiry

The UK's departure from the EU looms but questions remain about the legitimacy of the Referendum. The Electoral Commission said illegal overspending occurred during the Referendum. Were the vote/any subsequent political acts affected? Article 50 was triggered. Was the overspend known about then?

This Inquiry must determine urgently whether any decision-maker knew about the EU Referendum irregularities before Article 50 was triggered.

What assessment (before Article 50 was triggered or subsequently) was made, and by whom, of any impacts illegal spending had on the outcome of the EU Referendum?

These are matters vital to the democratic process and public confidence in British politics. Until they are resolved Brexit must be deferred.

The Government responded to this petition on Monday 15th April 2019

Investigations are conducted by the independent Electoral Commission. There are no plans to establish a Public Inquiry. The Government is committed to delivering the result of the EU referendum.

We treat the security and integrity of our democratic processes extremely seriously. The Government is committed to making sure the rules work, now and in the future.

It is not acceptable for any organisation to breach electoral procedures – and it is regrettable that fines have been levied on multiple groups on both sides of the referendum campaigns.

The Electoral Commission is the independent regulatory body responsible for ensuring that elections and referendums are run effectively and in accordance with the law. If offences are alleged, it is right that they are investigated thoroughly by the appropriate agencies. Those agencies and any investigations are rightly independent of government.

Close to three quarters of the electorate took part in the 2016 referendum, trusting that the result would be respected. This Government wrote to every household prior to the referendum, promising that the outcome of the referendum would be implemented. 17.4 million people then voted to leave the European Union, providing the biggest democratic mandate for any course of action ever directed at the UK Government. Following the referendum, Parliament overwhelmingly confirmed the result by voting with clear and convincing majorities in both of its Houses for the European Union (Notification of Withdrawal) Bill.

The British people cast their votes once again in the 2017 General Election where over 80% of those who voted, voted for parties, who committed in their manifestos to upholding the result of the referendum. This Government stands by this commitment.