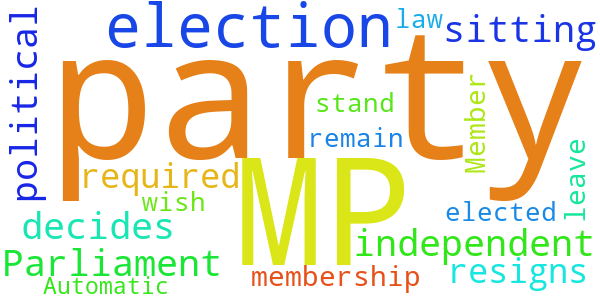 If a Member of Parliament decides to leave the party they were elected under, then they should be required by law to call a by-election and stand as an independent or for another party if they wish to remain a sitting MP

The Government responded to this petition on Wednesday 6th March 2019

Formally, electors cast their vote for individual candidates, and not the political party they represent. The Government does not plan to change this constitutional position.

There is no requirement for a Member of Parliament to stand down and cause a by-election to be held if they decide to leave the party for which they stood and were elected. Formally, electors cast their vote for individual candidates, and not the political party they represent; although it is recognised that many people vote on the basis of party preference. It is generally agreed that a candidate, if elected to the House of Commons, is not deemed to be a delegate of a particular party, and will hold the office to which they have been elected in a personal capacity.

A Member of Parliament who decides to leave the party for which they were elected and to continue to sit in the House of Commons will be required to stand as a candidate at the next General Election if they wish to remain in office.

Amending the existing law would involve a significant change to our constitutional arrangements, and would raise important issues about the role and status of Members of Parliament, which would need careful consideration. The government currently has no plan to make such changes.