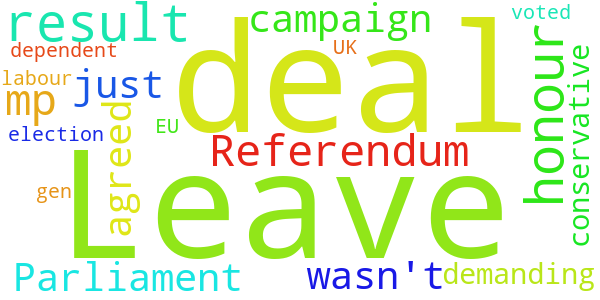 Parliament must honour the Referendum result. Leave deal or no deal 29/03/19

Parliament must honour the Referendum result. Leave deal or no deal 29/03/19

The UK voted in a referendum in 2016 to Leave the EU....this wasn't dependent on a " deal" ....but rather just "Leave"
we are now demanding that all mp's honour this result .conservative and labour mp's also agreed to leave on 29/03/19...... deal or no deal as part of their gen election campaign

The Government responded to this petition on Thursday 4th April 2019

The Government stands by its commitment to uphold the result of the 2016 referendum and to deliver the UK’s withdrawal from the EU.

In 2016, this Government stated that it would honour the result of the referendum, whatever the outcome.

During the 2016 referendum campaign, this Government wrote to every UK household to promise that it would implement the result of the referendum. With that commitment in mind, 17.4 million people voted to leave the European Union, providing the biggest democratic mandate for any course of action ever directed at a UK Government.

The British people voted once again in the General Election of 2017, with over 80% of those who voted, voting for parties, including the Opposition, who committed to respecting and implementing the result of the referendum.

The British people have made their view clear. It is now our responsibility to uphold the result of the referendum.

The Government’s policy was to deliver Brexit on the 29th of March. The Government has agreed a short extension with the EU, and continues to try and find consensus that will ensure the UK leaves in a smooth and orderly way. However, in the event that the House does not pass the meaningful vote, the legal default remains that the UK will leave the EU on the 12th of April without a negotiated agreement.

Whilst the Government has conducted extensive preparations to ensure that the UK is prepared for all scenarios, the best outcome remains for the UK to leave the EU in an orderly fashion with a deal; this is the best way to secure certainty for businesses and citizens in the UK and the EU.