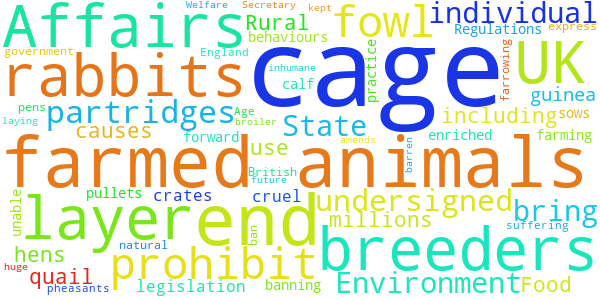 End the Cage Age: ban cages for all farmed animals.

End the Cage Age: ban cages for all farmed animals.

Across the UK, millions of farmed animals are kept in cages, unable to express their natural behaviours. This causes huge suffering.

We call on the UK government to end this inhumane practice by banning all cages for farmed animals. Cages are cruel.

This cannot be the future of British farming.

We, the undersigned, call on the Secretary of State for the Environment Food and Rural Affairs to bring forward legislation that amends the Welfare of Farmed Animals (England) Regulations 2007 to prohibit the use of:

The Government responded to this petition on Friday 22nd March 2019

We have already banned cages where there is clear scientific evidence that they are detrimental to animal health and welfare. Our comprehensive laws protect the welfare of livestock in all systems.

The Government shares the public’s high regard for animal welfare and the welfare of our farmed livestock is protected by comprehensive and robust legislation. This is backed up by statutory species specific welfare codes, which encourage high standards of husbandry and which keepers are required by law to have access to and be familiar with. Defra’s Animal and Plant Health Agency inspectors and local authorities conduct inspections on farms to check that the animal welfare standards are being met.

We have already banned cages or close confinement systems where there is clear scientific evidence that they are detrimental to animal health and welfare. For example, the keeping of sows in close confinement stalls was banned in the UK in 1999, whereas it was not until 2013 that a partial ban on sow stalls was introduced across the rest of the EU. Whatever the system of production, the most important factor in determining animal welfare is good stockmanship and the correct application of husbandry standards. This reflects the advice of our expert body, the Farm Animal Welfare Committee.

Since the 2012 EU ban on the use of conventional (“battery”) cages for laying hens, hens are kept in either free range, enriched cages, barn or organic systems. Over half of UK egg production is free range, higher than any other country in the EU. Enriched cages provide more space for the birds to move around than conventional cages and are legally required to provide nest boxes, litter, perches, and claw shortening devices which allow the birds to carry out a greater range of natural behaviours. Pullets (young hens) which will be housed in an enriched cage system as adults are reared in enriched cages, to ensure that the two environments are matched as far as possible to reduce stress and the likelihood of injurious pecking. In the UK, the use of cages to house both layer breeders and broiler (meat chicken) breeders is prohibited under the UK’s farm assurance scheme standards.

The UK has a very small industry producing rabbits commercially for meat which uses free range systems, not cages.

The UK is ahead of most other EU pig producing countries in terms of non-confinement farrowing, with approximately 60% of UK sows in farrowing crates to give birth, and the remaining 40% housed outside and free farrowed (crate-free). Research is on-going to develop and test indoor free farrowing systems under commercial conditions which protect the welfare of the sow, as well as her piglets.

The UK unilaterally banned the keeping of calves in veal crates in 1990, sixteen years before the rest of the EU. However, as young calves are highly susceptible to disease, up to 8 weeks of age, they are permitted to be kept in individual hutches of a specified size with bedding provided, as long as they have visual and tactile contact with other calves.

The Government will maintain its high regulatory baseline and look to raise standards sustainably over time as new research and evidence emerges. We have been very clear that EU Exit will not lead to a lowering of our high animal welfare standards. Our regulatory system will offer the same level of assurance of animal welfare following EU Exit as it does now and we are actively exploring options for strengthening the UK system moving forward. This includes plans to increase maximum penalties for animal cruelty from six months’ to five years’ imprisonment.

This petition was debated in Parliament on Monday 16th March 2020