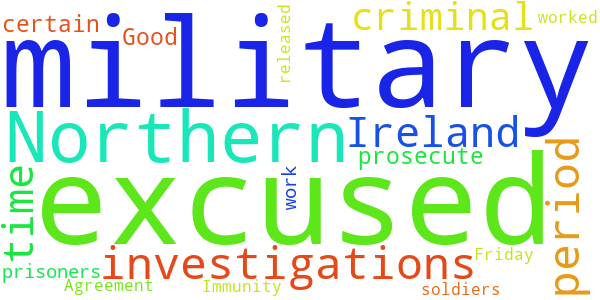 Immunity for soldiers who worked in Northern Ireland.

Immunity for soldiers who worked in Northern Ireland.

Do not prosecute the military for its work in Northern Ireland. Our military should be excused all criminal investigations after a period of time.

After the Good Friday Agreement prisoners were released. Our military should be excused criminal investigations after a certain period of time.

The Government responded to this petition on Monday 1st April 2019

This Government is unequivocal in our admiration for the Armed Forces whose sacrifices ensured terrorism would never succeed. However, our approach to the past must be consistent with the rule of law.

Criminal investigations and prosecutions are a matter for the police and prosecuting authorities who act independently of government and politicians.
This Government believes in the rule of law. Where there is evidence of wrongdoing it is right that this should be investigated and, where the evidence exists, for prosecutions to follow. We do not support amnesties or immunity from prosecution.

This Government will always salute the heroism and bravery of the soldiers and police officers who served to protect the people of Northern Ireland, and in too many cases paid the ultimate price. It is only due to the courageous efforts of our security forces that we have the relative peace and stability that Northern Ireland enjoys today. Our security forces ensured that Northern Ireland’s future will only ever be decided by democracy and consent, and never by violence. Over 250,000 people served in Northern Ireland during Operation Banner, the longest continuous military deployment in our country’s history, the vast majority with courage, professionalism and great distinction. This Government will never forget the debt of gratitude we owe them.

The Government has been clear that the current system for dealing with the legacy of Northern Ireland’s past is not working well and is in need of reform. The system to investigate the past needs to change to provide better outcomes for victims and survivors of the Troubles and to ensure that all, including members of the Armed Forces and police officers, are treated fairly.

That is why across Government we are working on proposals on how to best move forward, to address the legacy of the past. As part of this, we recently carried out a consultation a draft Stormont House Agreement Bill which set out how improvements could be made.

We are carefully considering the large number of responses (over 17,000) to our consultation on this issue and aim to publish our next steps shortly. No final decisions have yet been taken but we are committed to a way forward that works for everyone and is balanced, proportionate, transparent, fair and equitable.

This petition was debated in Parliament on Monday 20th May 2019