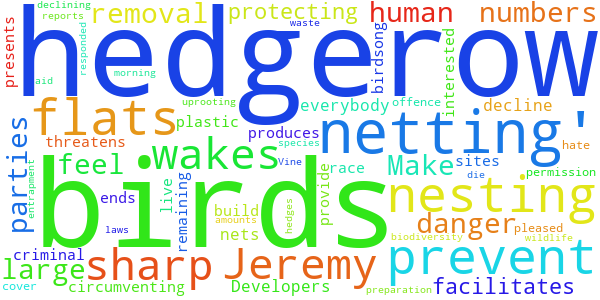 Developers, and other interested parties are circumventing laws protecting birds by 'netting' hedgerows to prevent birds from nesting.

This facilitates the uprooting of hedgerows which aid biodiversity and provide the only remaining nesting sites for birds, whose numbers are in sharp decline.

This is how Jeremy Vine responded to reports of 'netting' in preparation for hedgerow removal:

This is how the human race ends, everybody.

We cover hedges with nets.
We get permission to build flats because there are no birds.
Then we live in the flats and feel pleased that no birdsong wakes us in the morning.
Then we die.

Sometimes I hate us.

The Government responded to this petition on Monday 4th November 2019

Causing suffering to birds is already criminal. Planning authorities have enforceable powers to protect bird habitats and will soon be able to mandate that developers provide biodiversity net gain.

Wild birds and their nests are already protected under the Wildlife and Countryside Act 1981 and the Animal Welfare Act 2006. It is an offence to cause unnecessary suffering to a bird by an act, or a failure to act, where the person concerned knew, or ought reasonably to have known, that the act, or failure to act, would or be likely to cause unnecessary suffering. Anti-bird netting can, however, be appropriate in a few exceptional circumstances, to protect birds during construction work, or where birds have been identified as a health hazard.

Every local authority also has power to impose conditions when it grants planning permission, and these conditions can specify what information it needs to understand and protect any wildlife on the application site, and at what time of year development may take place. The authority can also use planning conditions to prevent disturbance on parts of a site, and stipulate how the phases of construction should be managed to avoid harm to biodiversity.

On 8 April 2019, in response to public concern about anti-bird netting around permissioned or potential development sites, a letter from the Secretary of State for Housing, Communities and Local Government was forwarded to major house-builders. It reminded them of their legal obligation to consider the impact of any project on local wildlife and take precautionary action to protect habitat. The Secretary of State was clear that if developers do not follow their obligations, he has not ruled out further action to protect our country’s valuable ecological system. Following this, major house-builders announced an end to the practice on their sites.

Our National Planning Policy Framework expects planning policies and decisions to enhance the natural environment by minimising the impacts of development on, and providing net gains for, biodiversity. We plan to require developers to deliver biodiversity net gain, under the forthcoming Environment Bill. Local authorities will be able to make certain that avian habitat is left in a measurably better state than it was before development.

This is a revised response. The Petitions Committee requested a response which more directly addressed the request of the petition. You can find the original response towards the bottom of the petition page (https://petition.parliament.uk/petitions/244233)

This petition was debated in Parliament on Monday 13th May 2019