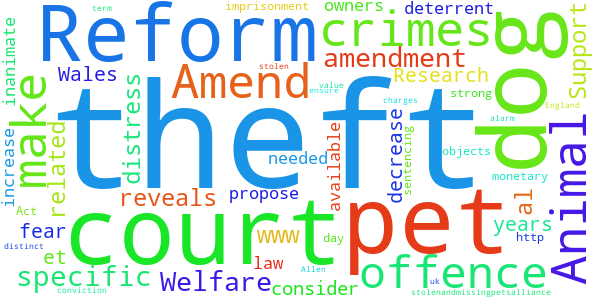 We propose to amend the Animal Welfare Act 2006 to make pet theft a specific offence, distinct from that of inanimate objects; and in sentencing, the courts must consider the fear, alarm or distress to the pet and owners and not monetary value.

A strong deterrent is needed. This amendment would ensure on conviction, imprisonment for a term up to 2 years becomes available to courts.

The Government responded to this petition on Tuesday 16th July 2019

Current sentencing guidelines takes account of the emotional distress that the theft of personal items such as a much loved pet can have on victims, and recommend higher penalties for such offences.

We understand the emotional trauma which the theft of a much loved pet can cause.

The theft of a pet is already a criminal offence under the Theft Act 1968 and the maximum penalty is seven years’ imprisonment. An amendment to the Animal Welfare Act 2006 is not, therefore, necessary.

The investigation of any crime is an operational matter for Police. It is for the Crown Prosecution Service to determine whether an individual should be prosecuted for a crime. If an individual is found guilty, the Courts determine what an appropriate sentence is. It is not clear how introducing a separate specific offence for theft of a pet animal would reduce the numbers of pets stolen.

In February 2016, the Sentencing Council updated its guidelines in relation to sentencing for theft offences. The guidelines take account of the emotional distress, and therefore harm, that the theft of a much beloved pet can have on the victim, and accordingly recommend higher penalties for such offences.

Since 2016, it has been compulsory for all dogs to be microchipped in England and Wales. This means that there is a much better chance that dogs will be returned to their owners. Vets, rehoming centres, and local authority dog wardens, scan dogs as a matter of good practice.

In addition, we encourage owners to take precautions to deter the theft of their dog, such as, where possible, not letting their pet out of sight when it is being exercised; varying their routines when walking their dogs; and not leaving dogs unattended in public places.

For these reasons, with particular attention to the offence being covered by the Theft Act 1968, the Government does not consider it is necessary to introduce a separate, specific, offence of theft, of a pet animal.

This is a revised response. The Petitions Committee requested a response which more directly addressed the request of the petition. You can find the original response towards the bottom of the petition page (https://petition.parliament.uk/petitions/244530)