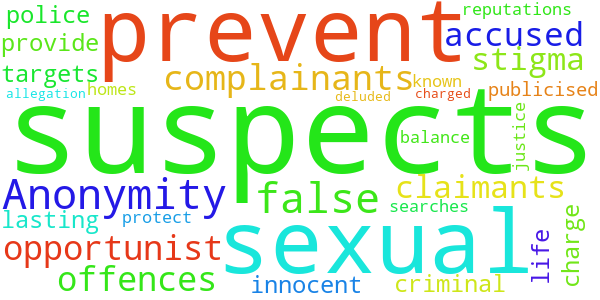 Anonymity for those accused of sexual offences until charge.

Anonymity for those accused of sexual offences until charge.

To protect the reputations of all innocent suspects, whether well-known or not, from the lasting stigma of a false sexual allegation.

To provide balance in the criminal justice system since complainants have anonymity for life.
To prevent the suspects becoming targets of opportunist and deluded claimants.
To prevent police searches of the homes of suspects who have not been charged being publicised.

The Government responded to this petition on Tuesday 23rd July 2019

There should in general be a right to anonymity before charge in respect of all offences but there will be exceptional circumstances where there are legitimate policing reasons for naming a suspect.

The Government believes that there should, in general, be a right to anonymity before charge in respect of all offences, but that there will be exceptional circumstances where there are legitimate policing reasons for naming a suspect.

Guidance for the police on the release of suspects’ names is governed by the College of Policing’s Authorised Professional Practice on ‘Media relations’. This Guidance was revised in 2017 following public consultation and the sections on identification of those under investigation were reinforced.

The Guidance highlights the importance of respecting suspects’ rights to privacy. It states that the police will not name those arrested, or suspected, of a crime, save in exceptional circumstances where there is a legitimate policing purpose to do so. A legitimate policing purpose may include circumstances such as a threat to life, the prevention or detection of crime, or where police have made a public warning about a wanted individual. The naming of an arrested person before they are charged must be authorised by a chief officer who must also ensure that the Crown Prosecution Service is consulted.

This approach recognises that there is a risk of unfair damage to the reputation of those persons, particularly if they are never charged. It strikes a balance between the rights of suspects to privacy and the need to prevent and investigate crime.

The College Guidance cannot and does not seek to prevent the media from relying on information from sources outside the police in order to confirm identities. Publishing names of suspects may be unlawful if it is found to be in contempt of court, in breach of a reporting restriction, defamatory or in breach of any right to privacy. Individuals who feel that they have been wrongly named can either make a complaint to the publishers’ self-regulator or take action through the courts.

Once it has been decided that there is sufficient evidence to charge a suspect with an offence, the principle of open justice requires that the defendant should be identified in the usual way, unless there is an exceptional and legitimate policing purpose for not doing so or reporting restrictions apply. A decision not to name an individual who has been charged should be taken in consultation with the Crown Prosecution Service.

Evidence does not suggest that false allegations are widespread. On the contrary, it is the under-reporting of crime to the police that is known to be particularly acute for sexual offences. However, when false allegations of sexual offences are made, they can have a serious adverse impact on the person accused. Wrongly and deliberately accusing someone of a sexual offence is a very serious matter. If there is evidence of this, the accuser could be prosecuted for perverting the course of justice.