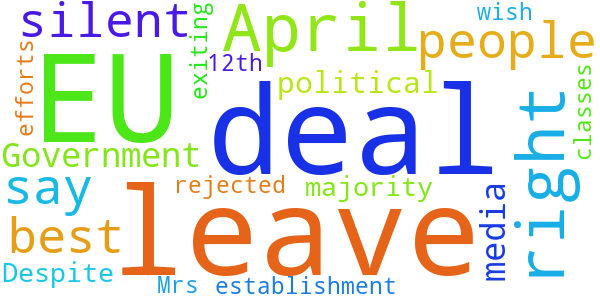 Leave the EU Without a deal on April 12th.

Leave the EU Without a deal on April 12th.

The Government are right when they say that exiting the EU is the "will of the people"
Despite the best efforts of the political classes and media establishment the "silent majority" still wish to leave the EU.
If Mrs May's deal is rejected again we should leave the EU on April 12 with No deal.

The Government responded to this petition on Wednesday 10th April 2019

The Government stands by its commitment to uphold the result of the 2016 referendum. We continue to seek a consensus across the House, which will allow the UK to leave the EU with a deal in place.

In 2016, this Government stated that it would honour the result of the referendum, whatever the outcome.

During the 2016 referendum campaign, this Government wrote to every UK household to promise that it would implement the result of the referendum. With that commitment in mind, 17.4 million people then voted to leave the European Union, providing the biggest democratic mandate for any course of action ever directed at a UK Government.

It is now the responsibility of this Government to uphold that result.

Parliament has continuously rejected leaving without a deal. The Government continues to seek a consensus across the House to find a way through which allows the UK to leave in an orderly manner, with a deal in place.

However, it remains the legal default that we will leave the EU without a deal on 12 April unless MPs can agree an alternative way forward and pass a withdrawal agreement.

The Government has been preparing for the contingency of a ‘no deal’ since 2016 and have accelerated no deal preparations to ensure the country is prepared for every eventuality. Parliament has now bound the Government to seek an extension to Article 50, so the Government has proposed that the extension should be as short as possible, ending when we have passed and ratified a deal.

This Government maintains that leaving with a deal remains the best solution. The Prime Minister has committed to working with members across the House to ensure that the result of the referendum is upheld, and the UK leaves the EU in an orderly manner, without undue delay.