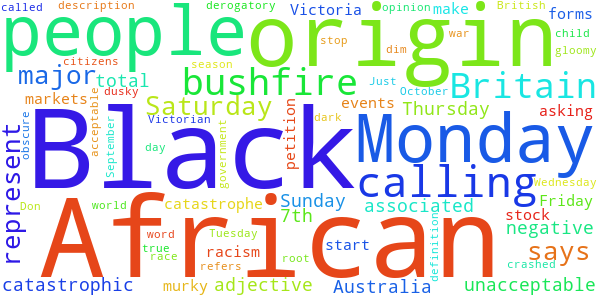 Don’t call me ‘Black’ there is nothing black about me!

Don’t call me ‘Black’ there is nothing black about me!

This is a petition asking the government to make the calling of people of African origin Black unacceptable.

Africans are the only race called in a negative adjective, the word black in its definition says it all, dark, gloomy obscure, dusky, murky, dim and etc.

"black" is often associated with catastrophic events such as Black Monday which refers to Monday October 19, 1987, when stock markets around the world crashed. Black Tuesday, Black Wednesday, Black Thursday, Black Friday, Black Saturday was the start in Britain of total war on September Saturday 7th 1940, and Black Sunday was a day of major bushfires in Victoria, Australia during the 1925-26 Victorian bushfire season.

“Black” is derogatory to people of African origin and in my opinion, it is the root of all forms of racism.

African British is more acceptable as it represent a true description of our origin. Just as one could not call his or her child “catastrophe” Britain should stop calling her citizens Black.