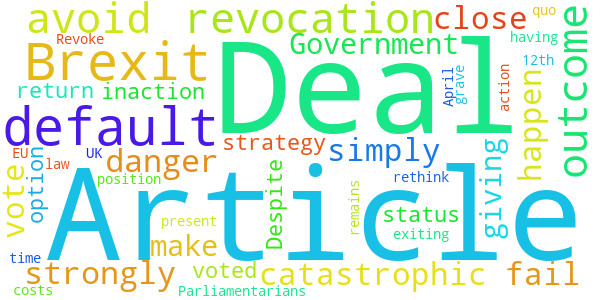 Without a Deal make "Revoke Article 50" the default action.

Without a Deal make "Revoke Article 50" the default action.

There is now a grave danger that No Deal will happen simply through inaction. To avoid this catastrophic outcome, the default position must become not No Deal but a revocation of Article 50.

Despite Parliamentarians having voted strongly against exiting the EU with No Deal, it remains in law the default option should the Government fail to get a deal by the close of 12th April.

We must avoid this outcome at all costs. A revocation of Article 50 is not a vote for No Brexit. It is a return to the status quo for the present, giving the UK time to rethink their Brexit strategy.

The Government responded to this petition on Wednesday 17th April 2019

It remains the Government’s firm policy not to revoke Article 50. We continue to seek a consensus across the House, which will allow the UK to leave the EU with a deal in place.

This Government will not revoke the Article 50 notice. During the 2016 referendum campaign, this Government wrote to every UK household to promise that it would implement the result of the referendum.

With that commitment in mind, 17.4 million people voted to leave the European Union, providing the biggest democratic mandate for any course of action ever directed at a UK Government. We are committed to leaving the European Union and upholding the result of the 2016 referendum.

To revoke Article 50, and thereby remain in the European Union, would undermine both our democracy and the trust that millions of voters have placed in Government. The Prime Minister has said that failing to deliver Brexit would cause “potentially irreparable damage to public trust” and this Government maintains that leaving with a deal remains the best outcome for the UK. The Government will therefore press on at pace with efforts to reach a consensus on a deal that is in the national interest.

As the Prime Minister said at the April European Council, we have agreed a flexible extension with the EU until the end of October. However, it should be clear that this Government will not revoke Article 50. The 2016 referendum gave a clear instruction to the Government to deliver the UK’s withdrawal from the European Union. This Government is committed to implementing this instruction.