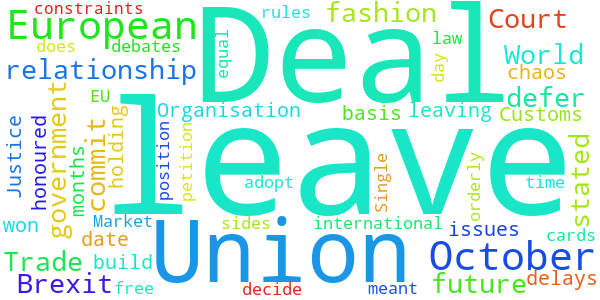 Leave the EU with No Deal in October 2019

Leave the EU with No Deal in October 2019

Brexit is in chaos. Leave won in 2016 that should be honoured. In the 2016 debates, both sides stated this meant leaving the European Union, Customs Union, Single Market and European Court of Justice.

This petition is for the government to commit to leave with No Deal but defer the leave date so as to leave in an orderly fashion.

After six months in October 2019 we leave, no deals, no if's, no but's, no delays. We adopt all law as our own and we trade under World Trade Organisation rules.

We are then free to build a future relationship from this position without any time constraints, on an equal basis without one side holding all the cards. Our future relationship with the world would be for the government of the day to decide, as it does on all other international issues.

The Government responded to this petition on Tuesday 24th September 2019

The Prime Minister has been clear: we will leave the EU on 31 October. We’d prefer to do so with a deal, but if there isn’t movement from the EU on the backstop we will have to leave without one.

The Prime Minister has said that the UK will be leaving the EU on 31 October. The Government must respect the referendum result. We would prefer to leave with a deal and we will work in an energetic and determined way to get that better deal. The Government is committed to preparing for this outcome.

The Government is undertaking preparations to ensure that the UK and the public are fully ready for Brexit. All necessary funding has now been made available.

The Government has launched the single largest public information campaign, “Get Ready for Brexit”. As part of the campaign, the Government has also launched an online checker tool (Gov.uk/brexit) to identify actions that businesses and citizens can take to prepare. Prior to this, the Government published approximately 750 pieces of communications on No Deal since August 2018, including over 100 technical notices explaining to businesses and citizens what they need to do to prepare. Meanwhile, the Government has laid over 600 Brexit Statutory Instruments and Border Force has increased its headcount by around 900 officers between March 2018 and March 2019. The Government is also undertaking steps to secure additional freight capacity and has worked on preparations with suppliers and partners, meaning that our plans should ensure the supply of critical goods, including medicines and medical products, remain uninterrupted.

Preparations are being made by the Government to ensure we are ready by pursuing international agreements, including signing bilateral voting rights agreements with Spain, Portugal and Luxembourg and approaching all other Member States for similar agreements. The Government has reached trade agreements with partners worth around £90 billion of current trade, secured air services agreements with countries like Canada and the US permitting passenger flights and has ensured that all agreements required to enable continuity in civil nuclear trade are in place - including with Japan, Canada, US, Australia and the International Atomic Energy Agency.

However we leave the EU, the Government’s ambition is for a comprehensive, ambitious future partnership based on a best in class FTA. It will be a relationship based on international law, not EU law. It will be a relationship where the UK would have left the Customs Union so we would have control of our own trade so that we can strike deals with other global partners; we will no longer have to make financial contributions to the EU budget; we will control our own migration policy through an Australian style points-based system; our own laws and courts will be supreme within the UK; and only our Parliament would have the power to set our taxes.

The Prime Minister remains absolutely focused on delivering on the vote of the British people by taking us out of the European Union on 31 October.