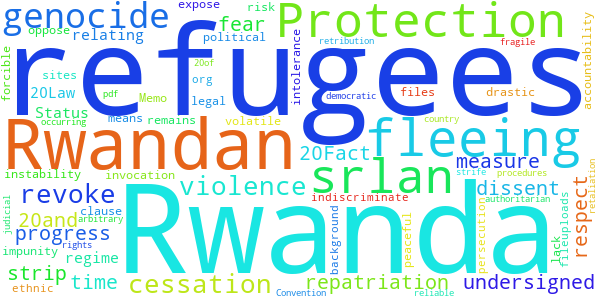 We, the undersigned, oppose the invocation of the “cessation clause” of the 1951 Convention relating to the Status of Refugees with respect to Rwanda. Cessation is a drastic measure that would strip Rwandan refugees of their legal rights and expose them to forcible repatriation and risk of further persecution. Rwandans are still fleeing their country, not because of fear of retribution from the 1994 genocide; they are fleeing Rwanda because of the instability, ethnic strife, arbitrary judicial procedures, indiscriminate retaliation, and political violence, intolerance of dissent, impunity, and lack of accountability occurring in Rwanda now. Rwanda has made progress since the genocide but it has not done so through reliable, democratic, and peaceful means. It remains a fragile, volatile, authoritarian regime. For background, see http://www.srlan.org/sites/srlan/files/fileuploads/Memo%20of%20Fact%20and%20Law.pdf.