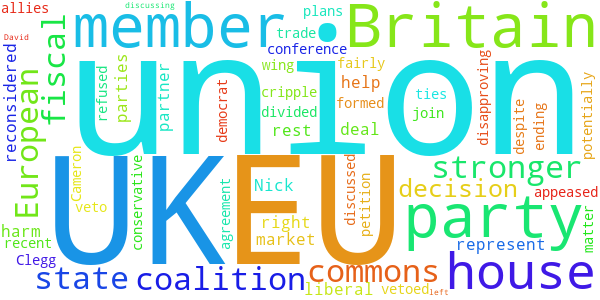 At the recent EU conference, David Cameron vetoed the EU plans for a fiscal union between its 27 members, the UK being the only member state to have refused the deal. The decision was made despite his coalition partner, Nick Clegg, disapproving of the veto, along with most, if not all, of the liberal democrat party, many of his own conservative party and without discussing his decision in the house of commons. He has only appeased the most right wing of his party, and has potentially divided the UK from the rest of the Union, could cripple the trade from Britain to the EU, which would harm Britain more than it would help, and could get the UK left behind in the stronger ties being formed in the EU among its member states. With this petition, I would have the matter reconsidered, discussed in the house of commons with BOTH parties of the coalition ending in agreement, so to represent Britain fairly, and to have a stronger market and union with our European allies.