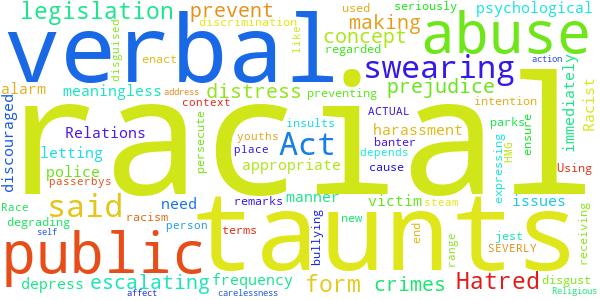 Race Relations Act 1976 & Racial and Religious Hatred Act 2006 do not address the issues of racial taunts in a public place, like youths in parks making meaningless taunts to passerbys. We need new legislation to ensure police take racial taunts in public seriously & take appropriate action immediately to prevent the taunts escalating further into other crimes. Using racial (or any other verbal taunts) insults can SEVERLY affect a person’s self-concept & cause distress, alarm, persecute, depress the victim in the ACTUAL receiving end of such verbal & psychological abuse. What is regarded as racism depends on the context, intention, frequency & manner it was said. Racist terms used can range from banter, carelessness, a form of swearing to degrading prejudice, expressing disgust, as well as bullying, hatred, discrimination, etc. Even if racial remarks are said as a form of swearing & thus ‘letting off steam’, it should be discouraged. Racial prejudices can also be disguised as ‘jest’.