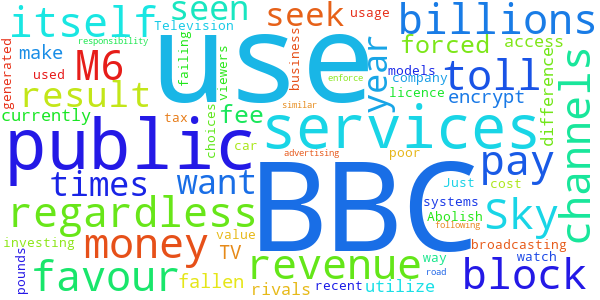 Abolish the TV licence fee by 2013

Abolish the TV licence fee by 2013

The BBC is the only broadcasting company to enforce a "tax" on the public, regardless if the public use its services or not.

In more recent times, the BBC has become very poor value for money and as a result has fallen out of favour with the "viewers" and is not seen to be investing its billions of pounds revenue generated each year back into itself, as such the BBC should be forced into following the same business models as that of its rivals and seek revenue from advertising, failing this it should be the responsibility of the BBC, at its own cost, to encrypt/block access to their channels/services, similar to that of those currently used on the Sky systems, so the public can make their own choices in whether to utilize the BBC's services or not.

I own a Television, but I may not watch the BBC,
Just in the same way I own a car, but may not use the M6 toll road,
the only difference is, when i want to use the M6 toll, i pay, but i have to pay for the BBC regardless of usage!