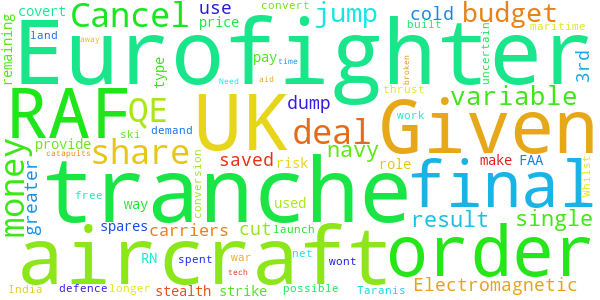 Given the Need for cut to the defence budget, and the uncertain final price of the F-35,

we should,
1, cancel the F-35
2, order 60-100 of the 3rd tranche of Eurofighters for the RN,
3, As the UK would have to pay for the navy conversion (which would aid the possible India deal) the UK should demand (or dump for F-18's) a greater work-share of the order,

net result ,
RAF tranche 1 Eurofighters wont have to be given away or broken for spares, to make way for tranche 2&3 aircraft, that the UK no longer has a cold war role for

A single aircraft type can be used by both the RAF and FAA,

money-saved can be spent on Taranis to provide a risk-free covert and first strike stealth aircraft,

Whilst the QE carriers are being built without catapults (the Electromagnetic tech not yet final) Eurofighter with variable thrust, can launch & land without them (ski-jump) for the time being