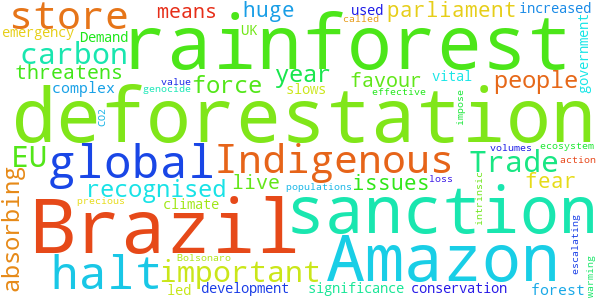 The government of Brazil led by Bolsonaro favour the development of the Amazon rainforest over conservation, escalating deforestation. Deforestation threatens indigenous populations who live in the forest, loss of a precious and complex ecosystem and a vital carbon store that slows global warming.

Indigenous people have called for the EU to impose trade sanctions on Brazil to halt the deforestation because they fear genocide. Also, the UK parliament has recognised a climate emergency. Since the Amazon rainforest is an important carbon store, absorbing huge volumes of CO2 each year, it's deforestation is of global significance. The intrinsic value of the rainforest should also be recognised.
Trade sanctions are used elsewhere for important issues as an effective means to force action.

The Government responded to this petition on Monday 30th September 2019

The United Kingdom shares concerns about deforestation in the Amazon. The Government believes these issues can be addressed most effectively through dialogue and our bilateral programmes.

The United Kingdom shares concerns about deforestation in the Amazon rainforest, and the severe impact on the climate, biodiversity and livelihoods. However, key to tackling these issues is to work with Brazil to find solutions rather than imposing sanctions.

Deforestation is an issue the United Kingdom has been dedicated to addressing in partnership with Brazil for a long time. Since 2012, the United Kingdom has invested nearly £120 million in a number of International Climate Finance programmes. These programmes help to tackle deforestation, and support Brazil’s rural communities, farmers and businesses to produce food and adopt sustainable agricultural practices that prevent forest fires, protect natural habitats and improve livelihoods.

In response to the recent forest fires, the Prime Minister pledged a further £10 million at the G7 summit on 25 August. This contribution is an expansion of an existing project: Partnerships for Forests. The funding will increase the programme’s support for the protection and restoration of Brazil’s rainforests, including areas impacted by the recent fires. Brazil, in response to international pressure, has launched an unprecedented operation to combat the fires, deploying 43,000 military staff.

The United Kingdom firmly believes climate change is one of the most important global issues and international cooperation is vital. Brazil is an important partner in this endeavour and has a critical role to play - we must work with them to find solutions. We have an ongoing dialogue with Brazil on these issues at both ministerial and official level.

The United Kingdom will continue to monitor the situation in the Amazon closely and raise these critical issues in our dialogue with Brazil. The Government remains committed to supporting efforts to tackle deforestation in the Amazon through our bilateral programmes.

This petition was debated in Parliament on Monday 7th October 2019