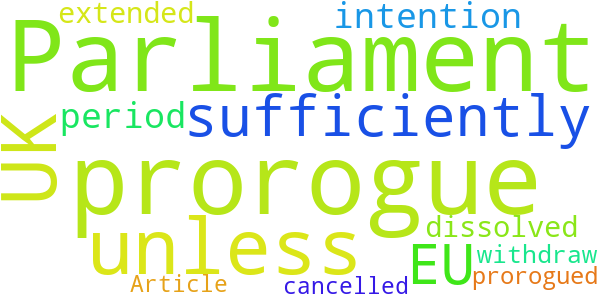 Do not prorogue Parliament

Do not prorogue Parliament

Parliament must not be prorogued or dissolved unless and until the Article 50 period has been sufficiently extended or the UK's intention to withdraw from the EU has been cancelled.

The Government responded to this petition on Monday 9th September 2019

Prorogation is a prerogative Act of the Crown, exercised on the advice of Ministers. We must respect the referendum result and the UK will be leaving the EU on 31 October whatever the circumstances.

The UK will be leaving the EU on 31 October whatever the circumstances. We must respect the referendum result.

The beginning of the next session is marked by the State Opening of Parliament during which the Queen delivers the Queen’s Speech. The Queen’s Speech sets out the programme of legislation the Government intends to pursue in the forthcoming parliamentary session.

As the Prime Minister said in his statement on 2 September 2019, the Government has committed to recruiting another 20,000 police officers, improving both NHS and schools funding, and completing 20 new hospital upgrades. It is to progress the Government’s agenda on these and many other fronts that the Prime Minister has sought to commence a new session of Parliament in October.


The Fixed-term Parliaments Act also provides the basis on which an early General Election can be triggered:

1. If a motion for an early general election is agreed either by at least two-thirds of the whole House of Commons or without a vote; or

2. If a motion of ‘no confidence’, in the terms set out in the Fixed-term Parliaments Act, is passed and no subsequent motion expressing confidence in Her Majesty’s Government is passed by the Commons within 14 days.

In the event of an early-general election, the Fixed-term Parliaments Act allows the Prime Minister to recommend a suitable polling day to the Queen. There will be a Royal Proclamation to set the date. Parliament is then automatically dissolved 25 working days before polling day.


The Government would prefer to leave the EU with a deal and will work in an energetic and determined way to get a better deal. The Government is very willing to sit down with the Commission and EU Member States to talk about what needs to be done to achieve that.

This petition was debated in Parliament on Monday 9th September 2019