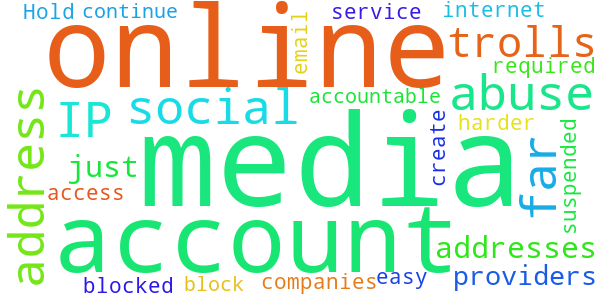 It’s far too easy for online trolls to just create another email address and another social media account if they have their accounts suspended.

However if their internet service providers were required to block their access to social media, and social media companies blocked their IP addresses, it would be far harder for them to get another account and continue their abuse.

The Government responded to this petition on Tuesday 24th September 2019

Unacceptable behaviour and content is far too prevalent online. The Online Harms White Paper sets out our plans for world-leading legislation to make the UK the safest place in the world to be online.

Unacceptable behaviour and content is far too prevalent online. The Online Harms White Paper sets out our plans for world-leading legislation to make the UK the safest place in the world to be online.

In recent years there has been a worrying rise in the amount of abuse, harassment and intimidation online - particularly directed at those in public life. Much of this abuse happens on social media, and the Government is aware of too many stories of public figures closing social media accounts following online abuse. In many cases, the offender will be unknown to the victim, and in some instances, they will have taken technical steps to conceal their identity.

This abuse is unacceptable – it goes beyond free speech and free debate, dissuades good people from going into public life, and corrodes the values on which our democracy rests.

The Online Harms White Paper sets out our intent to establish in law a new duty of care on companies towards their users, overseen by an independent regulator. Companies will be required to build an understanding of the risks associated with their services and take reasonable steps to guard against harm to their users, relative to their level of risk and resources. Companies need to take responsibility for tackling abusive behaviour on their services, because our society is built on democratic freedoms that allow different voices, views and opinions to freely and peacefully contribute to public discourse.

Details of the reasonable steps we expect companies to take will be set out in codes of practice which will be issued by the regulator. But specifying a particular technical solution risks that approach becoming outdated or defunct as technology and harms evolve.

Ahead of the implementation of the new regulatory framework, we will continue to encourage companies to take early action to address online harms.