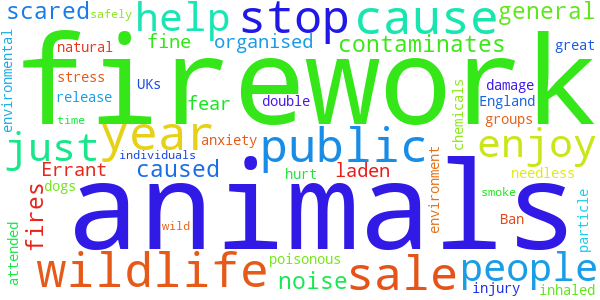 Ban fireworks for general sale to the public.

Ban fireworks for general sale to the public.

Every year more and more people, animals and wildlife get hurt by fireworks. It’s time something was fine to stop this. There are enough organised firework groups around for us to still enjoy fireworks safely so please help me stop the needless sale of them to the public!

The noise from fireworks causes a great amount of fear, stress and anxiety in wild animals. ... Errant fireworks can also cause environmental damage though fires, and from the release of poisonous chemicals and particle-laden smoke, which is not just inhaled by wildlife, but contaminates the natural environment.
In England last year, 4,436 individuals attended A&E because of an injury caused by a firework - more than double the 2,141 in 2009/10.
With around 40% of the UKs dogs being scared.

The Government responded to this petition on Tuesday 5th November 2019

The Government takes the matter of fireworks safety seriously. This includes protecting consumers and the public. Laws are in place to control firework availability and use.

The Government recognises that many people have strong feelings about fireworks, and the potential negative impact they can have on a community, for example, by causing distress to individuals or animals.

The current legislative framework for fireworks aims to reduce the risks to people and disturbance to animals. Legislation ensures products being placed on the UK market meet essential safety requirements. It also controls the storage, sale and use of fireworks including where and when fireworks can be sold, when they can be set off and by whom, and sets maximum noise levels. For example, legislation allows retailers to sell consumer fireworks during the traditional firework periods of: 15th October to 10th November (inclusive); the 3 days prior to and including the first day of Chinese New Year and Diwali; and 26th December to New Year’s Eve (inclusive). But retailers may only supply fireworks outside these periods if they obtain a licence from their local authority.

In addition, enforcement mechanisms are in place to tackle those situations when fireworks are sold illegally or misused. There are a range of penalties for breaching legal requirements, including, in certain circumstances, imprisonment. The police and local authorities have powers to tackle anti-social behaviour, where it arises, caused by the misuse of fireworks.

The Government recognises the strength of feeling around the use and misuse of fireworks and has listened to the concerns raised in parliamentary debate and wider discussion. We receive representations from a wide range of stakeholders, including members of the public, organisations and charities, with wide-ranging views on what the issues are and what action they would like to see.

Following the Westminster Hall debate on 26 November 2018 regarding fireworks, the Minister with responsibility for fireworks policy and legislation in the Department for Business, Energy and Industrial Strategy, Kelly Tolhurst MP, asked the Office for Product Safety and Standards (OPSS) to develop a fact-based evidence base on the key issues that had been raised. This includes looking for data around noise and disturbance, anti-social behaviour, non-compliance, environmental impact, and the impact on humans and animals. As part of this work we are considering the findings of the Scottish Government consultation on fireworks, which was published on 4th October. We will also consider the House of Commons Petitions Committee inquiry on fireworks once that has reported.

The aim of the evidence base is to build a full picture of the data around fireworks in order for government to identify whether there is a problem, and if so, what action - if any - is appropriate. This work will also help us identify trends across fireworks seasons and determine whether, there has (for example), been an increase in fireworks being set off or an increase in firework related injuries.