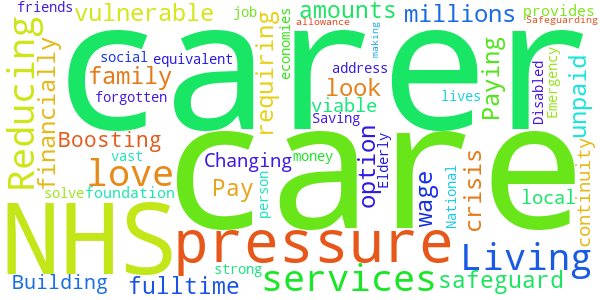 Paying unpaid carers would safeguard those requiring care making it a financially viable option for friends and family to look after those they love, Reducing pressure on 999 services and the NHS. Saving vast amounts of money per person. The carer who provides continuity in care is often forgotten

To address the social care crisis and in part solve it. Building a strong foundation..
Changing millions of lives. Boosting local economies. Safeguarding the vulnerable, Elderly and Disabled. Reducing pressure on our Emergency Services and NHS.

We value the varied levels of support that unpaid carers provide. Those providing significant levels of care receive the Carer’s Allowance, on which the Government will spend £3 billion this year.

The Government fully recognises the contribution that unpaid and family carers make in providing significant care and continuity of support to family and friends.

However, it has never been the role of the Government to pay people for the tasks they undertake, voluntarily, in the way that an employer would. Instead successive Governments have supported carers through allowances and benefits as well as wider cross-government actions.

The amount of caring unpaid carers undertake, and its intensity, will differ from carer to carer, as will their reasons and motivation for accepting caring responsibilities. Many are able to successfully combine caring with some employment, so will continue to have income from paid employment. Those unpaid carers who do need financial support may be able to get help from the benefit system – and not only from Carer’s Allowance but from a range of means tested benefits as well.

However, the support that carers need extends far beyond financial help and can’t just come from Government. We also need businesses to support carers and local communities, the voluntary sector and individuals to play their part.

In June 2018, the Department of Health and Social Care published a Carers Action Plan ‘Supporting carers today’, which set out a two-year programme of targeted work to support unpaid carers. It focuses on practical actions that are being undertaken to support carers, working across and beyond government.

Our Carers Action Plan has delivered several actions aimed to help and support carers remain in work for as long as they wish by promoting the value of attracting and retaining carers by offering flexible working and additional support in the workplace. Remaining in employment, where possible, will help carers will stay financially stable, as well as gaining the intrinsic sense of value associated with work and contributing to the wider economy. Key projects that offer support to carers have included:

• The Carer Confident benchmarking scheme seeking to encourage workplaces to have policies in place and a culture which enables carers to stay in employment.

• The Timewise flexible jobs hub to support carers to stay in employment and to break down barriers for carers getting the flexible jobs they reported they need that could fit around their caring responsibilities.

We also committed £5m to support 'returners', who are people who have taken time out of employment for caring responsibilities and want to return to paid work.

In 2018, the Government Equalities Office launched a private sector grant fund, which has now awarded in the region of £1.5m to 16 organisations supporting returners. The funding was awarded to projects that created new job opportunities, address specific barriers to returners and increased the understanding of how best to support people to gain paid employment.

But we recognise there is still more to do. That is why we are also consulting on a proposal for unpaid carers of one week leave per year alongside existing employment rights. A consultation was launched on the 16th March and will run until the 3rd August.

More broadly, we know there is a need for a long-term action plan for social care, and that that action plan should recognise the key role that unpaid carers play in the wider care pathway. Putting social care on a sustainable footing, where everyone is treated with dignity and respect, is one of the biggest challenges that we face as a society. There are complex questions to address, which is why we have invited cross-party talks. These will take place at the earliest opportunity considering the current coronavirus circumstances. The government will then bring forward a plan for social care for the longer term.

This is a revised response. The Petitions Committee requested a response which more directly addressed the request of the petition. You can find the original response towards the bottom of the petition page (https://petition.parliament.uk/petitions/300032)