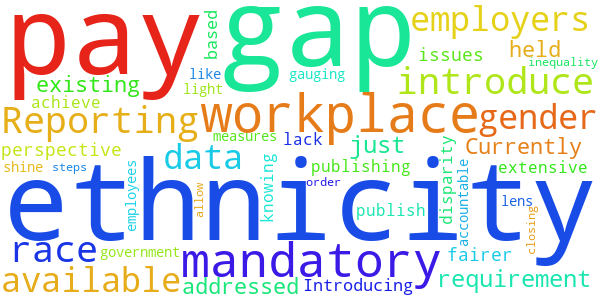 Much like the existing mandatory requirement for employers with 250 or more employees must publish their gender pay gap. We call upon the government to introduce the ethnicity pay gap reporting. To shine a light on race / ethnicity based inequality in the workplace so that they can be addressed.

Currently there is a lack of data available in gauging the ethnicity pay gap in the workplace. Introducing these measures will allow employers to be held accountable in closing the gap where there is disparity. In order to achieve a fairer workplace publishing this data is one of the next steps to knowing how extensive the issues are from a race and ethnicity perspective and not just through the lens of gender.

The Government ran a consultation from October 2018 to January 2019 on the introduction of mandatory Ethnicity Pay Reporting. We are currently analysing these and will respond by the end of the year.

Building a fairer economy means ensuring the UK’s organisations reflect the nation’s diversity – from factory floor to boardroom. We are committed to working closely with the business community to consider the steps that can be taken to build more inclusive workplaces, including reporting on diversity.

The Race Disparity Unit’s Ethnicity Facts and Figures website already publishes data collected by government about the different experiences of the UK’s ethnic groups at a national level. In 2018/19, the Government consulted on options for going further, exploring possibilities for employer-level ethnicity pay reporting.

Following the consultation, Government met with businesses and representative organisations to understand the barriers to reporting and explore what information could be published to allow for meaningful action to be taken. It is essential that any reporting is reliable and robust, and that is why last year we also ran a voluntary methodology testing exercise with a broad range of businesses to better understand the complexities outlined in the consultation using real payroll data.

This work highlighted the genuine difficulties in designing a methodology that produces accurate figures that allows for interpretation and action from employers, employees and the wider public. Issues highlighted include:

• Collecting data on ethnicity/burden on businesses - a survey of 80 organisations by PwC found that concerns around the legality of collecting ethnicity data, poor response rates from employees and ensuring employee anonymity were among the most common barriers to publishing ethnicity pay data. The survey found three-quarters of organisations lack the data needed to analyse their ethnicity pay gap, while 40% had not collected data because of concerns around GDPR and other legal restrictions.

• Reporting on a binary basis – one way to mitigate low employee declaration rates is to combine all individuals from an ethnic minority background into a single group for reporting purposes. However, this approach masks the significant variations in labour market outcomes between groups. In 2018, for example, employees of Chinese, Indian and Mixed or Multiple ethnicity all had higher median hourly pay than White British employees, while employees in the Pakistani and Bangladeshi ethnic groups had the lowest median hourly pay.

• Skewed results - employers highlighted that reporting at a more granular level risks results being skewed by particularly large or small pay values because of low numbers within certain ethnic groups. If an employer with 300 people employs Black individuals in proportion to the wider population (3% of the England and Wales working-age population is Black according to the ONS), it means their average pay would be calculated from just 9 individuals (assuming that organisation has 100% declaration rates). If declaration rates are only 50%, average pay would only be calculated on 4-5 individuals, which is below the proposed threshold of 5 individuals. This would be even lower in Wales where only 0.7% of the working-age population in Black. It is not possible to draw reliable statistics when data is based on too few values.

The Government is continuing to analyse this data and is committed to responding to the consultation by the end of the year at the latest.

This is a revised response. The Petitions Committee requested a response which more directly addressed the request of the petition. You can find the original response towards the bottom of the petition page (https://petition.parliament.uk/petitions/300105)