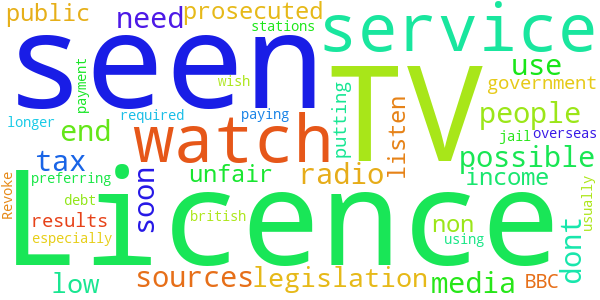 The TV Licence is not required as many people no longer watch the BBC preferring to watch other media sources and listen to many of there radio stations especially the overseas service this is seen as the british public paying for a service they dont need or use. This is also seen as a unfair tax on those on low income which usually results in many being prosecuted for non payment putting them further in debt and possible jail.

The Government responded to this petition on Thursday 14th May 2020

The licence fee is payment for a licence to watch or receive television programmes.The government is clear that the licence fee remains a licence to watch or receive television programmes, and is not a fee for BBC services. It is payable regardless of whether the licence holder ever watches the BBC. Licence fee revenue is not just used to fund the BBC, it is also used for other strategic public service objectives including S4C (the Welsh- language broadcaster).

The Royal Charter is the constitutional basis of the BBC which guarantees the BBC’s independence and provides the framework for how the BBC is governed and funded. It sets the BBC’s Mission which is ‘to act in the public interest, serving all audiences through the provision of impartial, high-quality and distinctive output and services which inform, educate and entertain’. It also sets the Public Purposes which include a duty to provide impartial news and information to help people understand and engage with the world around them and to show the most creative, highest quality and distinctive output and services.

One of the BBC's public purposes is ‘to reflect the United Kingdom, its culture and values to the world’ which the BBC does partly through the World Service - an international news service available on radio, television and online which provides impartial news reports and analysis in English and 40 other languages. The government strongly supports the BBC’s mission to bring high quality and impartial news to global audiences in some of the most remote places in the world, particularly where free speech is limited.

The licence fee funding model was considered as part of Charter Review which is the regular process for the government to review all aspects of the BBC. The BBC Charter Review consultation in 2015-16 received over 192,000 responses and found the majority of the public do not want to see a change in the way that the BBC is funded: 60% thought the current licence fee model did not need to be changed. As a result, the government committed to maintain the current model. It will be reconsidered again ahead of the next Charter Review, which is set to be completed by 2027.

However, the government believes that it is right to look again at whether the criminal sanction remains appropriate for TV licence fee evasion, given ongoing concerns that the criminal sanction is unfair and disproportionate. On 5 February the government launched a consultation on whether TV licence evasion should be decriminalised. This consultation closed on 1 April 2020 and received over 150,000 responses. The government is considering the submissions and we will respond in due course.

In addition, the government has recently announced the introduction of a new payment plan for the TV licence, known as the Simple Payment Plan, from 1 April 2020. The Simple Payment Plan is a new, flexible payment instalment scheme that allows customers to pay in equal fortnightly or monthly instalments throughout the year, and is available to certain customers who currently struggle to pay the TV licence fee. The government will consider whether this payment plan may be extended further to increase flexibility and convenience for all licence fee payers.

The government is committed to ensuring that the BBC and all public service broadcasters adapt to a fast changing market, and keeping them at the heart of our world class TV sector. This work will begin well in advance of the next Charter and will include looking at the licence fee funding model.