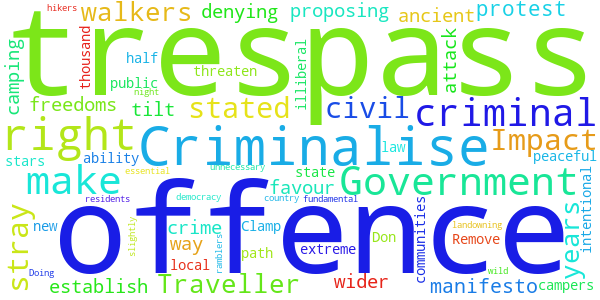 The Government's manifesto stated “we will make intentional trespass a criminal offence”: an extreme, illiberal & unnecessary attack on ancient freedoms that would threaten walkers, campers, and the wider public. It would further tilt the law in favour of the landowning 1% who own half the country.

For a thousand years, trespass has been a civil offence – but now the Government is proposing to make trespass a criminal offence: a crime against the state. Doing so could:
- Criminalise ramblers who stray even slightly from the path;
- Remove the ability of local residents to establish new rights of way;
- Criminalise wild camping, denying hikers a night under the stars;
- Clamp down on peaceful protest, a fundamental right and essential part of our democracy;
- Impact Traveller communities.

The Government responded to this petition on Wednesday 15th April 2020

Responses to the 2019 consultation on trespass, particularly unauthorised encampments, are currently being reviewed and the Government response will be issued in due course.

The law of trespass is largely one of common law, with the courts developing the law and resolving disputes based on the circumstances of the case. However, following the ‘Powers for Dealing with Unauthorised Development and Encampments’ consultation in 2018, it was clear that action is needed to address the sense of unease and intimidation residents feel when an unauthorised encampment occurs: the frustration at not being able to access amenities, public land and business premises; and the waste and cost that is left once the encampment has moved on. There is a need to strengthen police powers, in particular powers to tackle unauthorised encampments.

As a result, the Government launched a consultation in 2019 to seek views on how the act of trespass, when setting up or residing on an unauthorised encampment could be criminalised, or whether it is preferable to extend the current police powers to direct people away from unauthorised sites. Such measures would not affect ramblers, the right to roam or rights of way. Instead, measures could be applied in specific circumstances relating to trespass with intent to reside. The current Home Office consultation sets out a number of options for consideration, including trespass legislation such as that which has existed in the Republic of Ireland since 2002. This legislation provides for an offence where the trespasser is likely to ‘substantially damage’ the land or interfere with it; the police may direct trespassers to leave and failure to comply with that direction is an offence. Trespass is also a criminal offence in Scotland. The Trespass (Scotland) Act specifically excludes the exercise of recreational/roaming access rights.

All of these issues will be carefully considered as part of the consultation process. Responses to the consultation are currently being reviewed and a Government response will be issues in due course.