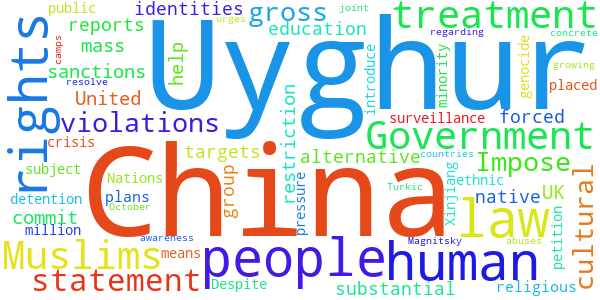 Impose sanctions on China over its treatment of Uyghur Muslims

Impose sanctions on China over its treatment of Uyghur Muslims

Since 2017, there have been many reports of the “cultural genocide” of Uyghur Muslims, a minority Turkic ethnic group native to Xinjiang, China. They are subject to mass detention, mass surveillance, restriction of religious and cultural identities, as well as other gross human rights abuses. Over a million Uyghurs have been forced into "re-education" camps.

In front of the United Nations in October 2019, pressure was placed on China regarding the treatment of Uyghurs during a joint statement from 23 countries. Despite this statement and growing public awareness, nothing substantial or concrete has been done to resolve the crisis and help the Uyghur people.

The Government responded to this petition on Tuesday 28th July 2020

We have grave concerns about the gross human rights abuses being perpetrated in Xinjiang. But it is not appropriate to speculate about future sanctions designations, as this may reduce their impact.

On 6 July, the Government established the Global Human Rights (‘Magnitsky’) sanctions regime by laying regulations in Parliament under the Sanctions and Anti-Money Laundering Act 2018. In a statement to Parliament, the Foreign Secretary set out in full the scope of the UK’s new Global Human Rights sanctions regime. He announced the first tranche of designations, as well as the Government’s approach to future designations.

We will continue to consider potential designations under the Global Human Rights sanctions regime, but it is not appropriate to speculate about who we may be considering, as to do so may reduce the impact of those future designations.

As the Foreign Secretary said in the House of Commons on 20 July, we have been clear about our grave concerns regarding the gross human rights abuses being perpetrated against the Uyghur Muslims in Xinjiang. This includes the extra-judicial detention of over a million Uyghur Muslims and other minorities in “political re-education camps”, systematic restrictions on Uyghur culture and the practice of Islam, and extensive and invasive surveillance targeting minorities.

Reports indicating that forced labour is being used and children are being forcibly separated from their parents add to the growing body of evidence about the disturbing situation that Uyghurs and other minorities are facing in Xinjiang.

Since 2018, the UK has played a leading role in drawing attention to the deeply concerning situation in Xinjiang, working with international partners in relevant UN bodies such as the UN Human Rights Council. As the petition notes, in October 2019, the UK’s Permanent Representative led a statement raising concerns about the situation on behalf of 23 countries at the UN Third Committee.

On 30 June at the most recent UN Human Rights Council in Geneva, the UK led a formal Joint Statement with the support of 27 international partners, setting out our deep concern both on Hong Kong, and the situation in Xinjiang. This statement, delivered through UK leadership, underlines the strength and breadth of international concern.

On 10 March at the 43rd session of the UN Human Rights Council, the UK raised concerns about systematic human rights violations and reports of forced labour in Xinjiang during our national statement. On 25 February at the same session, Lord Ahmad, Minister for South Asia and the Commonwealth, raised concerns about Xinjiang during the UK's opening address, calling on China to allow the Office of the High Commissioner for Human Rights unfettered access to the region.

We also frequently raise our concerns directly with the Chinese authorities. On 9 March, the Foreign Secretary raised the human rights situation in Xinjiang with his Chinese counterpart, Foreign Minister and State Councillor Wang Yi. On 5 March, the Minister for Asia raised similar concerns with the Chinese Ambassador to the UK.

The Government will continue to urge the Chinese authorities to change their approach in Xinjiang and respect international human rights norms, both bilaterally with China, and at the UN alongside our international partners.