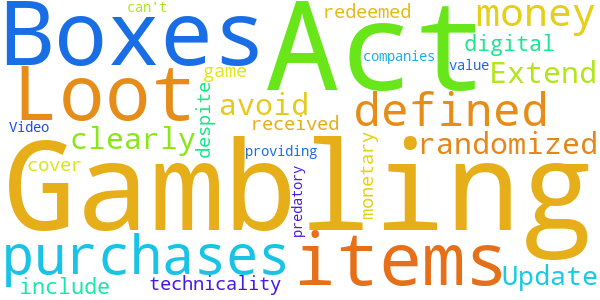 Video game companies avoid predatory Loot Boxes being defined as gambling on the technicality items received can't be redeemed for money despite clearly being gambling otherwise. Update the Gambling Act to include purchases providing randomized digital items even if they do not have monetary value.

The Government responded to this petition on Monday 6th July 2020

The government takes concerns around loot boxes very seriously and will be launching a call for evidence this summer. This will put us on the best footing to take whatever action is necessary.

Over half the UK population plays games, the vast majority engaging safely with content that allows them to enjoy fun, exciting play, find moments of relaxation, socialise, and learn new skills. However, technology in video games is constantly evolving and it is important that government policy reflects this.

We also believe the approach to protecting young people and vulnerable people should be based on evidence. To guide this approach, it will be important to understand fully the existing research around loot boxes, and how current protections and legislation work to keep people safe. That is why on the 8th June 2020 the Secretary of State for Digital, Culture, Media and Sport announced in a written statement to Parliament that we will be launching an open call for evidence on loot boxes later on in the summer. This will also support the review of the Gambling Act 2005.

The loot box call for evidence will seek and examine further information on a range of issues. These include concerns that loot boxes might lead to an increase in problem gambling, particularly amongst young people. Other areas we will investigate include the size of the loot box market, the design of loot boxes, how loot boxes work alongside other types of in-game purchases, and the effectiveness of the current statutory and voluntary regulation.

In addition to a written call for evidence, we plan to hold a series of sessions to discuss issues and solutions in detail, including the most effective approaches to protect people from any harms identified. Full details of the call for evidence and how to respond will be announced shortly with initial findings expected by the end of the year.

The government stands ready to take action should the outcomes of the call for evidence support taking a new approach to ensure users, and particularly young people, are protected.