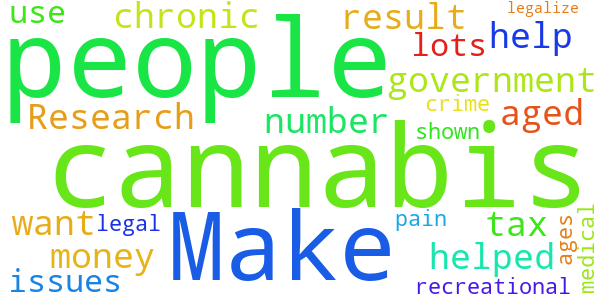 Make cannabis legal for recreational use for ages 21+

Make cannabis legal for recreational use for ages 21+

I want the Government to legalize and tax cannabis for people aged 21 and over. This could help the government make lots of money and could result in much less crime.

Research has shown that cannabis has helped people with a number of medical issues, such as chronic pain.

The Government responded to this petition on Thursday 9th July 2020

The Government has no plans to legalise cannabis for recreational use.There is clear scientific and medical evidence that cannabis is a harmful drug which can damage users' mental and physical health.

The Government has no plans to legalise cannabis. Cannabis is controlled as a Class B drug under the Misuse of Drugs Act 1971. The use and possession of recreational cannabis is illegal in the UK, regardless of the age of the user.

In 2018 the then Chief Medical Officer for England and Chief Medical Adviser to the UK Government, Professor Dame Sally Davies, carried out a review of the therapeutic and medical benefits of cannabis. This was part of work which led to changing the law to enable prescription of cannabis-based products for medicinal use. In her review, Dame Sally said:

“Cannabis has many active chemicals and only cannabis or derivatives produced for medical use can be assumed to have the correct concentrations and ratios. Using other forms, such as grown or street cannabis, as medicine for therapeutic benefit is potentially dangerous. The evidence that cannabis and some of its derivatives can be addictive and harmful has been known for some time and is not disputed by recent science, so I believe the reasons it is a controlled drug in the UK stand.”

Her review can be found at: https://www.gov.uk/government/publications/cannabis-scheduling-review-part-1

In addition, the independent Advisory Council on the Misuse of Drugs (ACMD), has previously advised that the recreational use of cannabis is a significant public health issue and can unquestionably cause harm to individuals and society. This was set out in a 2008 ACMD report, which can be found at:
https://www.gov.uk/government/publications/acmd-cannabis-classification-and-public-health-2008

The ACMD considered the question of cannabis harms most recently in its 2018 contribution to the work on policy relating to cannabis-based products for medicinal use. In its advice it reiterated the Chief Medical Officer’s concerns and added further detail as follows:

“The CMO’s report states that “using other forms, such as grown or street Cannabis, as a medicine for therapeutic benefit is potentially dangerous”. The ACMD agrees that raw Cannabis (including Cannabis-based preparations) of unknown composition should not be given the status of medication.

Prescribers, patients, regulators and policy-makers must have confidence in the effectiveness, composition and consistency of Cannabis-derived medicinal products to ensure patient safety. Cannabis-derived medicinal products should meet defined safety and quality assurance standards to ensure that they do not put patients at risk of harm. Risks to patients may arise from impurities and adulterants, and variability in the composition of active constituents.”

The ACMD report can be found at: https://www.gov.uk/government/publications/advice-on-scheduling-of-cannabis-based-medicinal-products.

In line with the advice of experts, cannabis-based products for medicinal use (CBPMs) were rescheduled from Schedule 1 under the Misuse of Drugs Regulations 2001, to Schedule 2 on 1st November 2018. This allows CBPMs to be prescribed appropriately where there is a clinical need. Only products meeting the definition of CBPMs have been rescheduled. Products not meeting this definition remain Schedule 1 drugs and may only be possessed under a Home Office licence.

CBPMs which are unlicensed “special” medicines can only be prescribed by a specialist doctor registered on the General Medical Council (GMC) Specialist Register on the basis of clinical need. Patients may be referred to a specialist by their general practitioner, for example. There is established legal provision enabling the production of CBPMs under a Home Office licence and a licence from the Medicines and Healthcare products Regulatory Agency (MHRA).