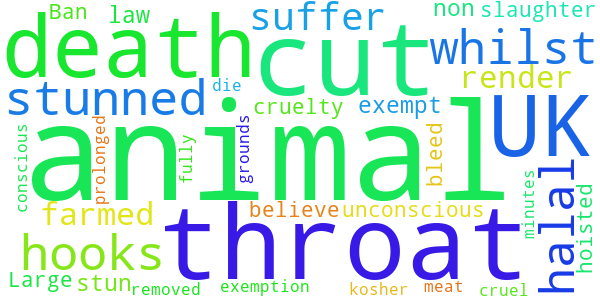 Ban non-stun slaughter in the UK.

Ban non-stun slaughter in the UK.

Under UK law, all farmed animals have to be stunned to render them unconscious before their throats are cut. However halal or kosher meat are exempt. We believe that on animal cruelty grounds, that this exemption should be removed.

These animals suffer prolonged and cruel deaths, after their throat is cut they are then hoisted up on hooks whilst still fully conscious until they bleed to death. Large animals can take up to 10 minutes to die.

The Government responded to this petition on Tuesday 14th July 2020

The Government would prefer animals to be stunned before slaughter but is committed to protecting the rights of Jews and Muslims to eat meat prepared in accordance with their religious beliefs.

The government’s position is that, while we would prefer animals to be stunned before slaughter, we are also committed to protecting the rights of Jews and Muslims to eat meat prepared in accordance with their religious beliefs. This is a fundamental issue of religious freedom and belief and that is why we will not ban religious slaughter We do, however, expect industry to provide consumers with the information they need to make informed choices.

Council Regulation (EC) No. 1099/2009 on the protection of animals at the time of killing makes it an offence to cause any animals avoidable pain, distress or suffering during their killing and related operations. In particular, animals must be stunned properly so that they are unconscious and unable to feel pain during the slaughter process. In this legislation, the only exception to the rule that animals must be stunned before slaughter is where animals are slaughtered in accordance with religious rites.

Where an animal has been subject to religious slaughter without stunning, it is not lawful to shackle, hoist or move it in any way until it is unconscious. Systematic checks must be carried out to ensure that animals do not present any signs of consciousness or sensibility before they are released from restraint and do not present any signs of life before undergoing any further processing. Slaughterhouse operators must have Standard Operating Procedures in place that specify the actions to be taken if an animal still presents signs of life.

Animal welfare is monitored and enforced in all approved slaughterhouses by Official Veterinarians of the Food Standards Agency. They will monitor that all animal welfare requirements are met to ensure that animals are spared avoidable pain, distress or suffering.

The Government is actively engaging with religious communities and other stakeholders on issues relating to religious slaughter, with a view, among other things to minimising non-stun slaughter volumes.

This is a revised response. The Petitions Committee requested a response which more directly addressed the request of the petition. You can find the original response towards the bottom of the petition page (https://petition.parliament.uk/petitions/300257)