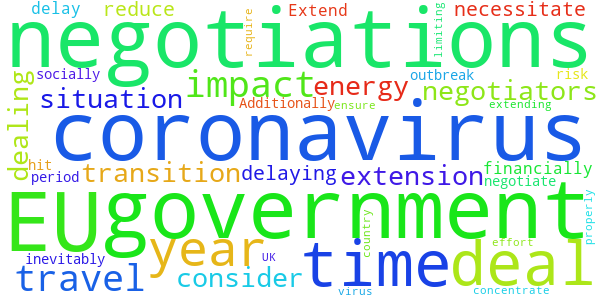 Extend the transition; delay negotiations until after the coronavirus outbreak

Extend the transition; delay negotiations until after the coronavirus outbreak

The government should consider delaying negotiations so they can concentrate on the coronavirus situation and reduce travel of both EU and UK negotiators. This would necessitate extending the transition period; as there can only be a one off extension, this should be for two years.

The coronavirus situation will inevitably require effort from the government and they should not be dealing with EU negotiations at the same time. A two year extension will ensure that we have the time and energy to properly negotiate a deal. The country will be hit financially and socially by the impacts of this virus. We cannot risk a ‘no deal’ impact on top of this.
Additionally, government and EU negotiators should be limiting travel at this time.

The Government responded to this petition on Thursday 9th April 2020

The transition period ends on 31 December 2020, as enshrined in UK law. The Prime Minister has made clear he has no intention of changing this. We remain fully committed to negotiations with the EU.

We will not be extending the transition period – we will be recovering economic and political independence at the end of the year, which the British people voted for.

The UK remains fully committed to the negotiations on our future relationship with the EU. However, in light on the current situation, the structure of negotiations has had to change and instead take place between the negotiating teams remotely. Last week, the UK held a series of conference calls, both sides discussed and provided technical clarifications on their respective legal texts and we have held conversations with the Commission to consider next steps. In the coming weeks we hope to have agreed a timetable for the negotiations by remote means in April and May. We remain committed to working closely with the devolved administrations (DAs) throughout negotiations with the EU to ensure a future relationship that works in the interests of the whole of the UK.

The first meeting of the Withdrawal Joint Committee (WAJC) was held as planned on 30 March. This meeting was held via teleconference, in line with the latest Government guidance, and is a good example of how we can continue our work on implementing the Withdrawal Agreement during this time.

We will, of course, continue to be guided by scientific advice about what is right for our workforce as we seek to develop these options.