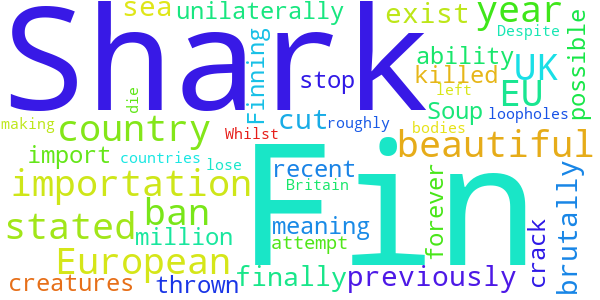 The UK should ban the importation of Shark Fins.

The UK should ban the importation of Shark Fins.

Now that we have left the EU, the UK has the ability to finally stop the importation of Shark Fins. They had previously stated that 'Whilst in the EU, it is not possible to unilaterally ban the import of shark fins into the UK.'

Each year roughly 75 million sharks are killed for Shark Fin Soup where their fins are brutally cut from their bodies and thrown back in the sea to die. Despite countries in recent years making an attempt to crack down on Shark Finning no European country has yet to ban the importation of fins, meaning that loopholes still exist. Britain should become the first European country to ban the importation of Shark Fins before we lose these beautiful creatures forever.

The Government responded to this petition on Monday 29th June 2020

The UK Government is strongly opposed to shark finning. Shark finning is already banned in UK waters and we continue to support stronger international controls.

The UK has a strong track record in marine conservation and places great importance in ensuring that appropriate protection and management is in place for all shark species.

The UK Government is strongly opposed to shark finning, the practice of removing the fins of a shark and discarding the body at sea. The UK has already banned the act of shark finning and has enforced a Fins Naturally Attached policy in order to combat illegal finning of sharks.

The UK Government does not oppose the capture and use of sharks providing catches are shown to be sustainable. However, not to use the whole of any sustainably caught animal would be considered wasteful. We continue to push for stronger controls in order to reduce the risk of illegal finning.

The greatest conservation benefit for sharks will come through controls directed at the activities of the fishing vessels operating on the high seas rather than restrictions on the trade itself. We recognise that the demand for shark fins can be a significant driving force behind the capture of sharks and can fuel unsustainable practices. This is why the UK continues to press for stronger international controls within the Regional Fisheries Management Organisations (RFMOs), the Convention on International Trade in Endangered Species of Wild Fauna and Flora (CITES), the Convention on Migratory Species (CMS) and the associated Sharks MoU.

Additional trade controls are in place for certain species of sharks under CITES. These can prohibit the trade in particular species or require trade to be carefully regulated, including through additional assessments of sustainability. Since 2003, 20 species of sharks and rays have been listed under CITES. The UK played a leading role in successfully championing the listing of an additional 18 shark species to appendix II of CITES at the Conference on Parties in August last year.

Having left the EU, the UK can champion conservation measures much more forcefully. This will help improve shark conservation globally through RFMOs and through CITES.

In addition, EU law allows individuals travelling to Europe to carry 20kg of dried shark fins for personal consumption. Our departure from the EU allows us to consider options to tighten the personal import allowance and improve the traceability of the shark in fin trade in the UK.