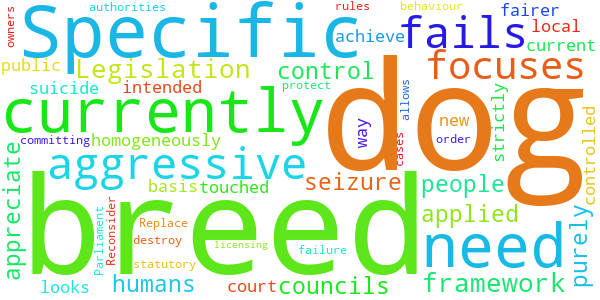 Breed Specific Legislation fails to achieve what Parliament intended, to protect the public. It focuses on specific breeds, which fails to appreciate a dog is not aggressive purely on the basis of its breed. It allows seizure of other breeds, but the rules are not applied homogeneously by councils.

We need a system that focuses on the aggressive behaviour of dogs, and the failure of owners to control their dog, rather than the way a dog looks. Reconsider a licensing system. The framework must be applied by local authorities the same, whereas currently some destroy dogs with no court order. It must be much more strictly controlled than it is currently. The system needs to be fairer for all, dogs and humans. We are touched by cases of people committing suicide over the current system.

The Government responded to this petition on Friday 17th April 2020

The Government considers that prohibition on the four types of fighting dog under Dangerous Dogs Act 1991 should remain in place. This is supported by police who are responsible for enforcing the Act.

The law on dangerous dogs is concerned with protecting the safety of the public. The four types of dog, pit bull terrier, Japanese Tosa, Dogo Argentino and Fila Brasileiro are prohibited because they are types bred for fighting. The Dangerous Dogs Act 1991 states that no person shall give away, breed or breed from, sell, or exchange a prohibited dog. However, the law allows a person to keep an individual dog where a court has considered that it does not present a danger to public safety. The court must consider the temperament of the dog and whether the intended keeper is a “fit and proper person” and other matters such as suitability of accommodation. Dogs placed on the Index of Exempted dogs may be kept by the owner under strict conditions, including that the dog is neutered, microchipped and kept on a lead and muzzled in public. There are currently around 3,000 dogs where a court has granted an exemption and allowed them to stay with their owner.

The Dangerous Dogs Act 1991 also makes it an offence to allow a dog of any breed or type to become dangerously out of control in any place. The maximum penalty for this offence is 14 years imprisonment, where the offence has led to a death and 5 years imprisonment where someone is injured.

Enforcers are able to take action before dog attacks happen. The Anti-social Behaviour, Crime and Policing Act 2014 includes specific measures to enable the police and local authorities to tackle irresponsible dog ownership before a dog attack occurs. Practitioners can intervene at an early stage to help to prevent situations involving irresponsible owners of dogs from becoming serious.

The 2014 Act includes streamlined measures to tackle anti-social behaviour, including where such behaviour involves a dog. The main tool to combat this form of irresponsible dog ownership is the Community Protection Notice (CPN). CPNs can be issued by local authority officers or the police on dog owners, or anyone temporarily in charge of a dog at the time of an incident, where dogs are behaving in an unruly way. The CPN could require the dog’s owner, or the person in charge of it, to take appropriate action to prevent a reoccurrence of the offending behaviour. To breach a CPN is a criminal offence and could lead to a significant penalty. The Government is determined to crack down on irresponsible dog ownership and to that end we are encouraging police forces across the country to use these new tools.

In addition, Defra has commissioned further research in collaboration with Middlesex University to look at responsible ownership across all breeds of dog. The research will consider different approaches and the effectiveness of current dog control measures. The research will also seek to identify and examine the factors and situations that may cause dog attacks; how to promote responsible dog ownership. We expect to have a final report by the end of 2020.

There are no proposals to re-introduce the dog licence. The previous licensing scheme for dogs was ceased in 1988 because it was estimated that only around 40% of owners were compliant. This is similar to compliance levels in countries that still operate a dog licensing scheme.