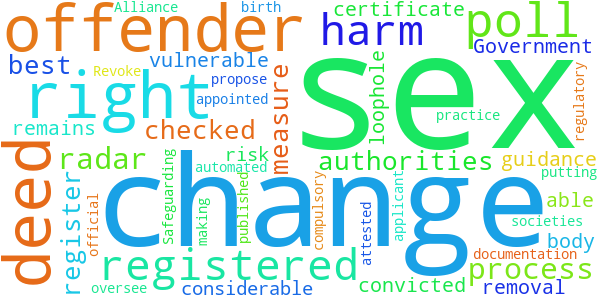 The Safeguarding Alliance have found there remains a serious loophole, whereby registered sex offenders are able to change their name by deed poll, and go under the radar of all authorities, putting societies most vulnerable at considerable risk of harm.

1. The removal of the automated right to the change of name if the applicant is a convicted sex offender or on the sex offenders register.

2. A regulatory body appointed to oversee the name change process.

3. Government guidance to be published making it a compulsory best practice measure that an attested birth certificate is checked against official documentation.

The Government responded to this petition on Tuesday 24th November 2020

We understand concern about offenders attempting to hide their identity and are working with Courts and Disclosure and Barring Service to close any monitoring gaps to ensure the public is kept safe.

Protecting the public from sexual and violent offenders who pose a risk of serious harm is a key priority for the Government and the police. The Government is recruiting 20,000 more police officers and creating extra prison places to ensure violent and sexual offenders spend longer behind bars.

There is no current legal process to start using a new name. But a person who has changed their name might need a ‘deed poll’ to apply for or to change official documents like a passport or driving licence. A deed poll is a legal document that proves a change of name. ‘Enrolling’ a deed poll means that you’re putting your new name on public record. You must apply to the Royal Courts of Justice to get an ‘enrolled’ deed poll using the deed poll process. It costs £36.

In 2015, the Home Office published its Use and Change of Name Guidance (https://www.gov.uk/government/publications/change-of-name-guidance/use-and-change-of-names) on GOV.UK. It sets out the policy to make it more difficult for people to change their identities to enable them to commit crime, and to ensure there is a consistent approach to handling applications to change names contained on official documents.

As Minister for Safeguarding, Victoria Atkins MP has written to the Master of Rolls and the Royal Courts of Justice requesting that a Judicial Working Group should consider criminality in regard to the enrolled deed poll process.

Once we have done so through the Judicial Working Group, we intend to also amend our existing Home Office guidance so that only enrolled deed polls (through the Royal Courts of Justice) are accepted as a proof of name change. We have also written to the Disclosure and Barring Service (DBS) to recommend that they undertake a feasibility study to determine the impact of requiring those seeking a DBS certificate to present a birth certificate alongside other primary and trusted Government documents.

Registered sex offenders are currently managed by the police. Tough checks and a range of legislative measures are available to the police to manage known sex offenders living in the community. Local police are in the best position to identify the risk posed by individuals.

Across the country, there are nearly 1,000 police officers who are dedicated full time to the management of sex offenders. These officers do not work in isolation. In a local area, all other police officers and PCSOs know who the relevant offenders are, and contribute towards their management in the course of their day-to-day policing duties.

The failure of a sex offender to tell police of a name change within three days is a criminal offence, with a maximum prison sentence of five years, and the Home Office already reserves the right not to issue a document in a new name to a registered sex offender.

Sex offenders have a duty under the law to notify the police when they change their name as part of their notification requirements. Offenders who attempt to hide a name change already face tough sentences. Where the police are notified that a sex offender has changed their name, the offender’s records will be updated on the Violent and Sex Offenders Register (also known as the ‘Sex Offenders Register’) and the Police National Computer. Her Majesty’s Passport Office (HMPO) relies on police forces to notify them of registered sex offenders so they can be flagged on HMPO systems.

If a sex offender then applies for a passport under a new name, HMPO will consider the application in consultation with the supervising police force. If the police have no objections and there are no other reasons to refuse, then the application will be granted and the new passport details provided to the supervising police force. HMPO requires anyone changing their name to be using that name for all purposes.

The Disclosure and Barring Service (DBS) plays a vital role in ensuring employers have the right information to help protect those in their care and prevent unsuitable people from working closely with them. ID guidelines for the DBS checks state that employers must ensure the applicant declares all previous name changes, and provides documentary proof to support the change of name. If the applicant is unable to provide proof to support the change of name for the check, it is for the employer to hold a probing discussion with the applicant about the reasons why before considering validating their identity.

This is a revised response. The Petitions Committee requested a response which more directly addressed the request of the petition. You can find the original response towards the bottom of the petition page (https://petition.parliament.uk/petitions/300705)