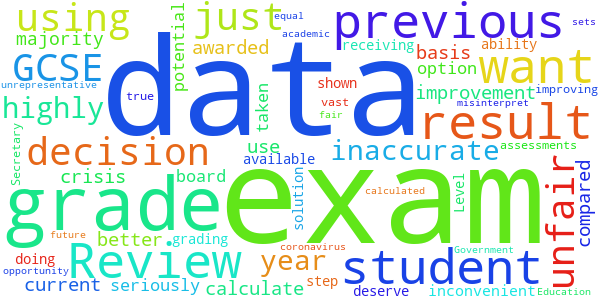 Review the decision to use previous data to calculate exam grades

Review the decision to use previous data to calculate exam grades

We want the Education Secretary and the Government to step in and review the exam board’s decision on how GCSE and A-Level grades will be calculated and awarded due to the current coronavirus crisis. We want a better solution than just using our previous data to be the basis of our grade.

Using previous data could result in unfair grading as the majority of this data may be inaccurate and unrepresentative of a student’s ability. Most of these assessments are not always taken seriously, and could misinterpret students true potential. Students’ GCSE exam results have often shown vast improvement compared to their previous data. We deserve an equal opportunity for improving and receiving fair grades. Although the option of doing our exams next academic year is available it is still highly inconvenient and sets back our future.

The Government responded to this petition on Friday 4th September 2020

Students in England have now received the higher of their centre assessment grade or calculated grade for GCSEs, AS and A levels in 2020.

Following an announcement on 17 August, the great majority of GCSE, A and AS level students have now received the centre assessment grades that their schools and colleges had submitted for them. In the minority of cases where the grades that the exam boards had previously calculated for students were higher than the centre assessment grade, students have received their calculated grade.

Ofqual had consulted on and implemented a standardisation process for exam results this summer, but the system resulted in too many inconsistent and unfair outcomes for A and AS level students. It became clear that the approach resulted in too many anomalies to be resolved through appeals and which severely undermined confidence in the system.

Subsequently, Ofqual decided to award centre assessment grades, which are the grades which schools and colleges assessed students were most likely to have achieved had exams gone ahead. The Government supported this decision, which was deemed to be the fairest approach to avoid some students receiving grades that did not reflect their prior performance.

We understand this situation has caused a great deal of stress and uncertainty and apologise for the distress this has caused young people and their parents.